ELECTIONS 2022: Assembly elections in 5 states will be held in 7 phases

The election commission set the dates for assembly elections in five states on Saturday. Elections will be held in seven phases in Uttar Pradesh, Uttarakhand, Punjab, Goa, and Manipur. 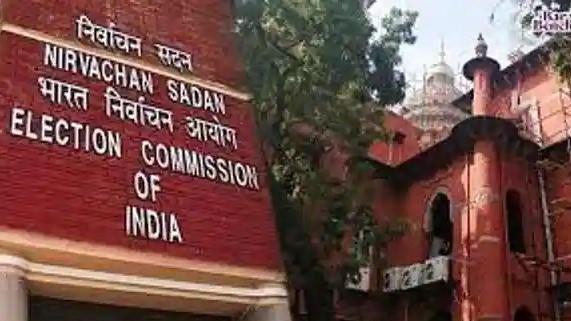 According to the election commission, stringent protocol will be followed in assembly elections in five states between Corona and Corona. Until January 15, no road shows, rallies, pediatras, bicycle or scooter rallies will be permitted. Only virtual rallies will be allowed for campaigning. After the triumph, there will be no victory procession.
Elections will be held in 690 assembly segments across five states, according to chief election commissioner Susil Chandra. The election will be attended by 18.34 crore voters. To hold elections between corona, new protocols will be implemented. Both doses of the corona vaccination will be administered to all election officials. Those who require cautionary doses will be given them.

1. Corona selection elections will be difficult; new covid protocols will be used.
2. Patients who have been afflicted with the corona virus will be eligible to vote through postal ballot.
The number of polling stations has been increased by 3.16 percent. Over 2.15 lakh polling stations have been established.
4. The maximum number of voters at a polling location ranges from 1500 to 1250.
5. In large states, the election spending ceiling has been raised to Rs. 40 lakhs.

1. All of the shows will be videotaped.
2. Political parties would be required to disclose their candidates' criminal history.
3. The candidate will be required to disclose his or her criminal background.
4. Each candidate would have a spending limit of Rs. 40 lakhs in Uttar Pradesh, Punjab, and Uttarakhand.
5. In Manipur and Goa, the expenditure ceiling will be Rs. 28 lakhs.
The BJP won 325 seats in the 2017 assembly elections. In the 2019 Lok Sabha elections, bjp plus won 64 out of 80 seats. The congress had the worst electoral results in both elections. In the 2017 assembly elections, it won seven seats, but only one seat in the 2019 Lok Sabha elections.
In the 2017 assembly elections, the congress administration led by Captain Amarinder Singh made a comeback. The bjp-akali government has been deposed by the congress. In these elections, the congress gained 77 out of 117 seats, a substantial majority. In the 2019 elections, the congress was again the party with the most seats won. In the Lok Sabha elections, it won eight seats.
The Bharatiya Janata Party (BJP) had won the previous assembly elections. It received 57 seats out of a total of 70. With 61.7 percent of the vote, it received nearly twice as many votes as the congress.
The BJP won 13 seats out of 40 in the 2017 assembly elections in Goa, while the Congress won 17 seats. With the aid of the magi and other parties, the bjp created the government. The Aam Aadmi Party, which did not win any seats last time, is back in full force this time.
The Bjp won 21 of the 60 seats in the 2017 assembly elections. The congress received 28 members, while the npf received four. The bjp had taken control of the government.
This time, the election spending ceiling has been raised.
On Friday, the Election Commission (ECI) increased the campaign spending limit for candidates. Candidates will be authorized to spend Rs 95 lakh instead of Rs 70 lakh in their parliamentary constituency during the Lok Sabha elections, compared to Rs 70 lakh in 2014.
Similarly, they would be permitted to spend rs.40 lakhs instead of rs.28 lakhs and rs.28 lakhs instead of rs.20 lakhs during the assembly elections. On the proposal of one of its committees, the commission increased the expenditure limit.
Also Read : Explained: Why did BJP lose and AAP won big in Chandigarh municipal polls
Only persons who have been vaccinated can be given the entry
Access to booths It is possible to prevent persons who do not receive both doses of vaccine at polling places from voting in the corona elections. However, there has yet to be a final decision. On Thursday, the election commission and the union health minister met to address the issue. The situation stemming from the increased number of corona cases in the country was thoroughly examined during the meeting. Simultaneously, the potential impact of holding elections was discussed. The health secretary gave the commission an update on the country's Covid situation.