Explained: Why did BJP lose and AAP won big in Chandigarh municipal polls

AAP stunned the ruling party in Chandigarh municipal polls; here we look at the possible reasons behind it 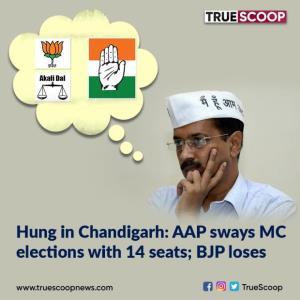 After Bharatiya Janata Party (BJP) came into power in 2014, there have rarely been any elections where the ruling party didn’t win. Forget the win part, they have of course achieved storming results more often than not. But on Monday, they received a shocker from Chandigarh municipal polls.
The party was defeated by Aam Aadmi Party (AAP) in Chandigarh municipal polls in some style. AAP ran away with 14 seats, BJP got 12 while Congress continued its struggle, earning just eight wards. Akali Dal also emerged victorious in one ward.
Now, the questions that are making rounds are: what went wrong with BJP and what different did AAP do to stun the ruling party? Here, we try to answer both the questions.
Possible Reasons behind BJP’s loss
BJP’s similar results in the Himachal Pradesh by-election due to surge in prices seems to have influenced the Chandigarh municipal polls as well. People are finding it hard to cope up with inflation, resulting in lack of trust in the BJP.
One more important factor is the lack of faith of farmers in the BJP government. No doubt, Narendra Modi-led BJP scrapped the farm laws, it seems the farmers haven’t forgotten the scars it gave to them. They had to protest for months and lost a lot of people during the strikes.
Chandigarh, having been downgraded to 66th position in cleanliness survey could be seen as another reason for BJP’s surprising defeat in Chandigarh. It is because this result occurred when Chandigarh had all, the administrator, MP and mayor from BJP.
ALSO READ: Chandigarh civic polls: AAP pips BJP on debut; ruling party's Mayor among losers
Possible Reasons behind AAP’s success
Remember how AAP head, Arvind Kejriwal, stunned everyone in Delhi with his campaigning? What did he do? His manifesto was simple: to give people convenience in two of the most basic necessities: water and electricity.
AAP followed the same model in Chandigarh as they promised to provide free water up to 20,000 litres to each family in Chandigarh every month. It bore fruit as they scalped the most number of seats.
Hikes in water tariff and increased property tax rates during BJP’s reign in Chandigarh could also be a reason for their failure this time around. Most people in Chandigarh found it highly problematic to deal with surge in prices.
The other major point behind AAP’s success was, unlike BJP, they focused on local issues. They promised people of better management, better infrastructure and education. BJP, on the other side, was trying to use the Modi wave to make it through, which cost them highly.