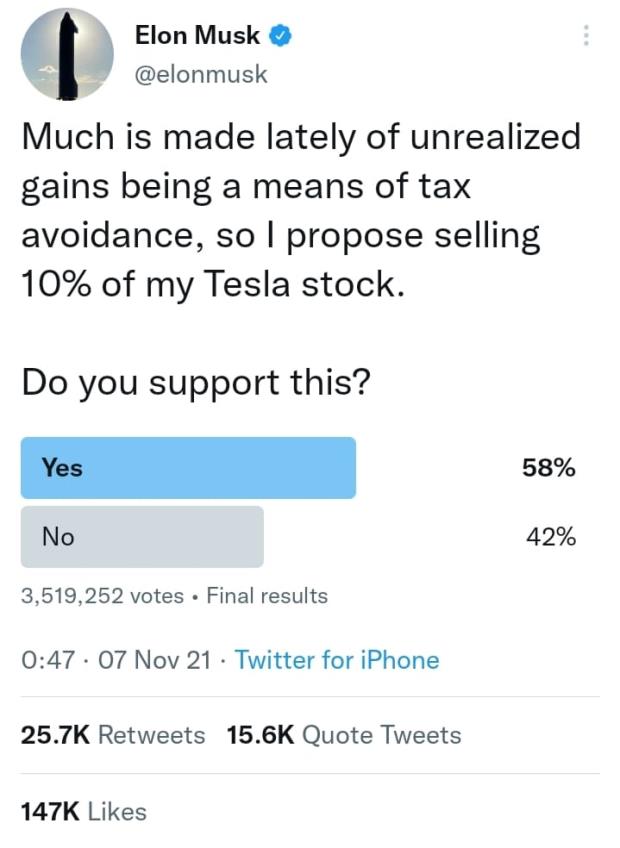 Tesla Chief Executive Officer Elon Musk exercised 2.15 million stock options in the electric car-maker, and then sold stock, shortly after he held a vote over Twitter asking his followers whether he should sell some of his stock.

The shares were sold “solely to satisfy the reporting person’s tax withholding obligations related to the exercise of stock options," the filing said. The contracts, which came from a stock option award Musk received in 2012, were set to expire in August next year.

It’s the billionaire’s first sale since 2016 when he last exercised stock options and liquidated some of his newly acquired shares to cover about $590 million of income taxes.

The sale was prompted by a Nov. 6 poll Musk set up on Twitter, saying that “much is made lately of unrealized gains being a means of tax avoidance, so I propose selling 10% of my Tesla stock." Almost 58% of the 3.5 million votes were cast in favor of a sale.

Musk, 50, is the world’s richest person with an almost $300 billion fortune, according to the Bloomberg Billionaires Index. His common shares in Tesla make up about 60% of it. That indicates Musk may carry out additional sales to fulfill his promise.

The unpredictable billionaire, whose net worth is around $300 billion, said he proposed selling the stock as some Democrats have been pushing for billionaires to pay taxes when the price of the stocks they hold goes up, even if they don't sell any shares.

However, the wording on unrealized gains also called a "billionaires tax," was removed from President Joe Biden's budget, which is still being negotiated.

Tesla has been on a roll. On Friday, the company's shares gained more than 40 percent since last month when it announced a record profit for the third quarter. Last week, Tesla shares hit an all-time closing high of $1,229.91 per share. It's the most valuable carmaker in the world with a market capitalization of more than $1 trillion. The stock fell 4.8 percent Monday to $1,162.94. It is still up nearly 65 percent for the year.