Explained: The Money laundering case in which Punjab's former MLA Khaira arrested by ED 2days back

The Congress MLA has been arrested by the Enforcement Directorate under the Prevention of Money Laundering Act (PMLA). The arrest came six months after an ED team raided his residence in Chandigarh. 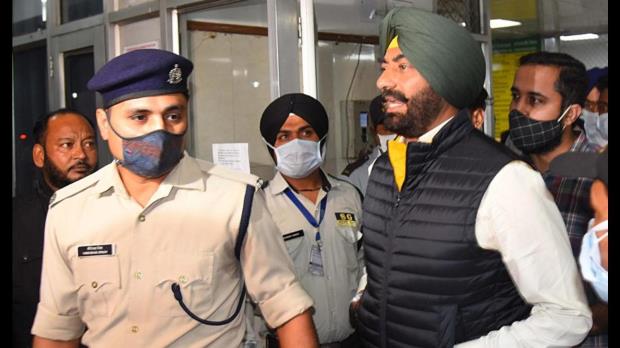 A court in Mohali on Friday remanded former Punjab MLA Sukhpal Singh Khaira in the custody of the Enforcement Directorate for seven days. Khaira was arrested on Thursday (November 11) for alleged involvement in a money laundering case that is linked to narcotics trafficking and a fake passport racket.

Khaira will be produced in Mohali court on November 18 after his judicial custody ends, informed Mehtab Khaira, the MLA's son and his advocate.

The Congress MLA has been arrested by the Enforcement Directorate under the Prevention of Money Laundering Act (PMLA). The arrest came six months after an ED team raided his residence in Chandigarh.

Who is Sukhpal Khaira?

Khaira was a member of Congress for decades. However, the 56-year-old legislature joined the Aam Aadmi Party ahead of the 2017 assembly elections. He won and became an MLA from Bholath in Kapurthala district.

He was the leader of the opposition for a short time before being deposed by the party's high command in 2019.

In response to his dismissal, Khaira left the AAP with half a dozen AAP MLAs and formed his own party, the Punjab Ekta Party. He returned to Congress in June of this year.

What is the case?

As per information, the case pertains to the probe in the 2015 Fazilka (Punjab) drugs-smuggling case, in which 1,800 grams of heroin, 24 gold biscuits, two weapons, 26 live cartridges and two Pakistani SIM cards were seized from a gang of international drug smugglers by security agencies.

Khaira was not named in the FIR filed in the year of drug haul, however, the court ordered the probe as ED asserted that the MLA is an "associate" of drug case convicts and counterfeit passport racketeers. The Punjab Police submitted two charge sheets in the case to the trial court, neither of which included Khaira's name as an accused.

At the prosecution's request, the court recalled certain witnesses and accused in the case in July 2017 and they claimed that Khaira has been involved in the drug haul. While convicting nine of the accused in October 2017, the sessions court ordered an investigation into Khaira as an "additional accused."

What does ED say?

Based on the information gathered from the Jalalabad FIR, the ED raided Khaira's Chandigarh residence, as well as at least 10 other locations in Punjab and Delhi including his son-in-law Inderveer Singh Johal's residence, on March 9, this year.

The ED told the top court that in just 12 years, Rs 4.86 crore was deposited in Khaira's bank accounts, despite his total income being less than Rs 1 crore.
During a search of Khaira's premises, the investigative agency allegedly found "unexplained cash and property transactions."

The ED had also summoned fashion designers Ritu Kumar, Sabyasachi, and Manish Malhotra for questioning in the case in June this year, alleging they had been paid lakhs in cash by Khaira for purchasing dresses in 2018-19, based on material gathered from Khaira's residence.

Khaira had dismissed the allegations levelled against him as frivolous. He explained that he had purchased three dresses from these designers for his daughter's wedding and paid for them with money from his bank account. He also claimed that he had done nothing wrong and that all of his assets were in order.

Khaira stated that he was "innocent" and that the ED's actions were "total victimisation."

Mehtab, too, called his father's arrest "unconstitutional and illegal," and accused the authorities of a political vendetta. He stated that the ED is questioning his father about a USD 1 lakh donation to the Aam Aadmi Party (AAP).

"The funding had gone to the AAP, and the party should be investigated. My father had nothing to do with it," Mehtab claimed.

He went on to say that his father has appeared before the ED 11 times and had presented all of the documents.

The politician denied any wrongdoing and claimed he was being targeted by central agencies because he has been outspoken in his opposition to the Centre's three new farm laws.