Explained: What is Critical Race Theory, Why’s it trending on Twitter?

The critical race theory has now become a major issue in the governor's race in Virginia. 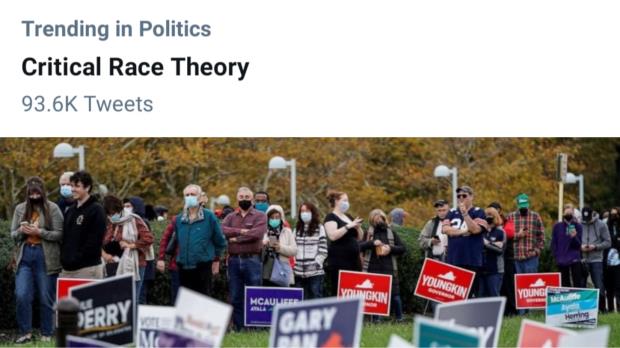 On social media, the debate over critical race theory has resurfaced. It started on Monday, after a video by The Good Liars, a political comedy duo went viral. The video has been viewed over 3.5 million times.

In the video, a Virginia man declares critical race theory to be a crucial issue in the state's gubernatorial election on Tuesday, though he has no idea what it is or what it teaches.

The critical race theory has now become a major issue in the governor's race in Virginia. Donald Trump, the former president, has spoken out against it. In the United States Senate, Republicans introduced a resolution condemning any requirement that teachers be trained in it.

The term seemed to appear out of nowhere in statehouses and at political rallies. It's gone from an obscure academic discussion point on the left to a political rallying cry on the right in the last year.

Even those who denounce or seek to ban critical race theory in schools have a hard time defining it.

What exactly is Critical race theory?

Critical race theory is a way of looking at the history of the United States through the lens of racism. It was created in the 1970s and 1980s by academics in response to what they saw as a lack of racial progress following the 1960s civil rights legislation.

It is based on the idea that racism is institutionalised in the United States and that it serves to maintain white people's dominance in society.

The theory's supporters say that the United States was founded on land and labour theft, and that federal law has preserved unequal treatment of people based on race. Proponents also believe that race is a cultural construct rather than a biological one.

One of the early proponents was Kimberlé Crenshaw, executive director of the African American Policy Forum, a social justice think tank based in New York City. "It was simply about telling a more full story of who we are," she says.

There is no evidence that critical race theory is taught to K-12 public school students, though some of its central concepts, such as the lingering effects of slavery, are.

"We do not teach critical race theory to students," said Lisa Luten, a spokeswoman for the school system. "It's more of a race theory that adults use to discuss the context of their environment in academia."

In his campaign for governor of Virginia, Republican Glenn Youngkin said he would prohibit critical race theory from being taught in public schools.

Why are Republicans angry?

Many Republicans see critical race theory's concepts as an attempt to rewrite American history and persuade white people that they are inherently racist and should feel guilty for their advantages.

However, the theory has also become a generic word for racial concepts that some conservatives object to, such as white privilege, systemic inequality, and inherent bias.

Last year, during a White House event, focused on the country's history, then-President Trump pointed at critical race theory and the 1619 Project, bringing it into the mainstream. "A crusade against American history," he said, as well as "ideological poison that will destroy our country."