Where the saffron party aims to make India a “Hindu-Rashtra,” Facebook plays major role in waking the so-called Hindu inside the religious majority. Interestingly, the company is not new to facing such accusations of promoting Hindutva on its platform. 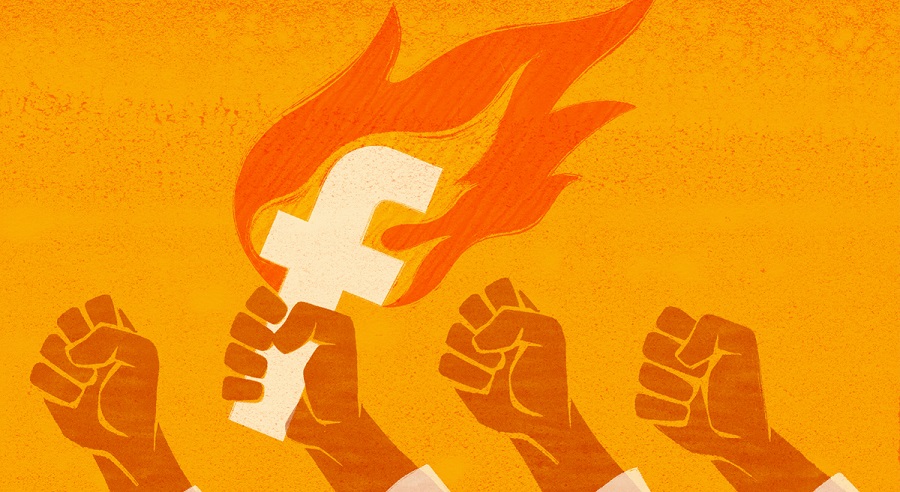 In the tech savvy millennial age, the Internet and social media greatly impact politics, particularly in big democracies like India. Facebook, facebook-owned WhatsApp and Instagram have become more than just social media platforms to kill time by evolving into propaganda driving forces. Hate speech and inflammatory content just for spreading propaganda and increasing vote bank for a particular party have become common on Facebook. And under the Modi-led BJP regime, observers can clearly see Facebook becoming a flagbearer of Hindutva in India.

Those who pay attention to Facebook recommendations (based on their interests and location) can easily see the social media giant propagating the ideology of Hindutva by its pro-Modi and pro-Hindu content; disseminating fake information which can be categorised as anti-Muslim which can incite communal hatred and violence. Meanwhile, the company says but never takes serious action against hate speeches, especially shared or linked to ruling BJP leaders or members, circulating on its platform.

PM Modi has been accused of assaulting the platform for the interest of his party, particularly during elections. Last year, reports in the Wall Street Journal stated that Facebook was selectively enforcing its hate speech policies to avoid wrath from the BJP.

According to media reports, Sophie Zhang, a former data scientist at Facebook who has now turned whistleblower accused the social networking site of 'taking selective action against fake accounts in the run-up to last year's Delhi elections.'

Zhang claims that the BJP, Congress, and Aam Aadmi Party all exploited fake accounts to sway elections. Only the network of accounts directly related to a BJP lawmaker was not removed by Facebook, while other accounts were taken down.

The whistleblowers suggest that Facebook promotes Hindutva, an ideology that BJP blindly follows. Where the saffron party aims to make India a “Hindu-Rashtra,” Facebook plays major role in waking the so-called Hindu inside religious majority residing in the country.

According to reports citing internal documents, Facebook was well aware that hate speech was growing on their site in India, which may fuel ethnic violence, but it did not deploy resources to stop it.

The so-called Facebook Papers, which were leaked by whistleblower Frances Haugen, has already highlighted the influence of Facebook as well as its companies- WhatsApp and Instagram, on the politics of Hindutva in India.

The report which was based on internal memos from the past two years reveals Facebook's persistent struggles in India to manage abusive content on its platforms.

According to the report, Facebook's products in India were flooded with provocative content that was linked to deadly religious riots featuring Hindutva terror.

Whistleblower Haugen claims that the social network puts profits before efforts to fight hate speech and misinformation on its platform.

India is Facebook and its subsidiary WhatsApp's biggest market in terms of users. So, this weekend international media houses like The Wall Street Journal, the New York Times and The Washington Post and many others focused on Facebook's presence in India.

According to a July 2020 report by the company's own researchers, the share of provocative content started to rise in December 2019.

The Wall Street Journal said that "rumours and calls to violence surged especially on Facebook's WhatsApp messaging service in late February 2020," when clashes between the Hindu majority and Muslim minority left dozens dead.

The account followed Facebook-recommended posts, videos, and accounts, but a company researcher discovered it encouraged a flood of pro Hindutva, fake and inflammatory content.

"In the last three weeks, I've seen more photographs of dead people than I've ever seen in my life," the staffer was quoted as saying in a 46-page report issued by Haugen.

The survey also coincided with India's airstrike on Pakistan in response to a militant suicide bombing in the disputed Kashmir region.

India launched an air assault on Pakistan in response to a militant suicide bombing in the disputed Kashmir region.

That experience was described as an "integrity nightmare" by the anonymous researcher.

The content included violent images and made chauvinistic claims about India's airstrikes. According to reports, one image showed a man carrying a severed head and using language that referred to Pakistanis and Muslims as "dogs" and "pigs."

According to the report, Hindu and Muslim users in India were exposed to "a large amount of content on Facebook and WhatsApp that encourages conflict, hatred, and violence," including content blaming Muslims for the spread of the coronavirus and claims that Muslim men are targeting Hindu women for marriage as a "form of Muslim takeover" of the country.

Whistleblowers say "Facebook is not aggressive enough in addressing the evidence that the platform was being used by military officials in Myanmar to spread hate speech during mass killings of the minority Rohingya ethnic group".

"I, working for Facebook, had been a party to genocide," the whistleblower wrote in the affidavit.

Despite the several revelations by whistleblowers, ex-employees and media reports, the company takes no measure since Modi and Facebook CEO Mark Zuckerberg are known to have a tight relationship.