Esther Acebo has gone popular on social media after an Instagram user published a photo of her with a Hindu deity named Lord Ganesha. 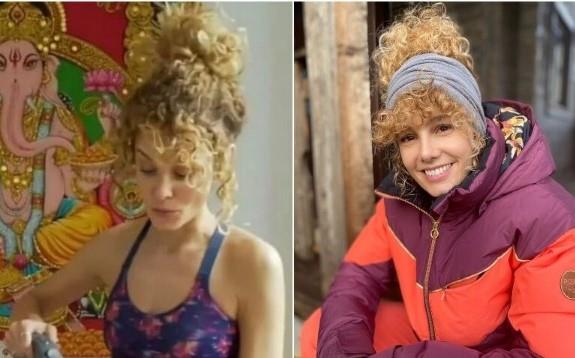 Esther Acebo, a Spanish actress best known for her role as Mónica Gaztambide aka Stockholm in Netflix's smash series La Casa De Papel aka Money Heist, has been making headlines for all the right reasons. Acebo has gone popular on social media in an odd turn of events, soon after an Instagram user published a photo of her standing in front of a portrait of the Hindu god Lord Ganesha.
The artwork of the Hindu god was allegedly seen in one of her films and was hanging on her home's wall, according to the post.
It looks to be a screengrab from Esther Acebo's Instagram live session, according to the post. Following the sighting of their god on the Spanish actor's house, Money Heist supporters in India have expressed their joy and pride.
Money Heist's 'Inspector Raquel Murillo' previously took the internet by storm with her cover of Salman Khan and Sushmita Sen's classic '90s hit Chunari Chunari. The iconic song from Biwi No 1 is renowned as one of the actor's superhits, and it not only drew the attention of actress Sushmita Sen's admirers, but it also caught her off guard.
Also Read : RRR lose 100 crores before release, covid is hitting hard for the makers
Esther Acebo is most known for her role as Mónica Gaztambide as Stockholm in the Netflix series La Casa De Papel aka Money Heist, for which she received worldwide acclaim.
The acclaimed Netflix criminal thriller has seen plenty of action, romance, and emotional journeys centred on its main character. Mónica Gaztambide, alias Stockholm, is one of the cast members who went from working as a secretary at the Royal Mint of Spain to being a member of the gang as Stockholm.
Meanwhile, Money Heist Season 5 volume 2 was published on Netflix last month to rave reviews from viewers all around the globe.