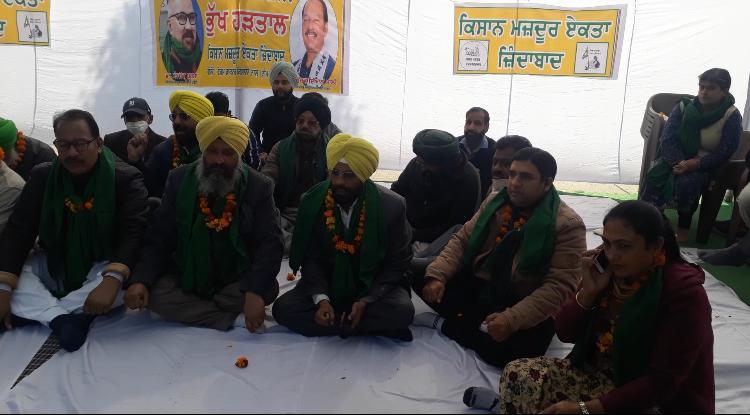 Following the call of the Samyukt Kissan Union (SKU), the farmers under the banner of Pendu Mazdoor Union and Kirti Kissan Union today went on a one-day hunger strike. Calling the attack on farmers at the Sinhgu border on Friday, a government -sponsored violence, the farmers held the strike outside the District Administration Complex (DAC).

While condemning the attack, allegedly led by the ruling political party, the farmers demanded immediate repeal of the three contentious farm laws. Over a hundred farmers including some students observed the strike from 12 PM-3.30 PM. Moreover, on the occasion of the death anniversary of the Mahatma Gandhi, the farmers also observed Sadbhavna Diwas.

Demands were made for the arrest of those responsible for the Delhi violence, including the enactment of a law to guarantee minimum support price, and the cancellation of false notices issued against peasant leaders.

Kamaljit Singh, a member of the Punjab Students Union, stated that the union government with the connivance of government agencies and the police has turned the peaceful agitation of the farmers into a violent. "Owing to the suspension of internet at the Delhi-Hayana borders  rumours and false information is being spread across the country to malign the farmers' protest”, he added.

Rattan Singh, president of the Kirti Kissan Union, said that even as the conspiracies of the government successfully blemished our two months long peaceful agitation, we wouldn't give up until the laws were withdrawn. "It was sad for us that our historic tractor march was stained with the communal colour but we will continue to agitate peacefully and will expose the government", added Rattan, while criticizing stone-pelting on the farmers in the presence of police.

Get the latest update about Farmers Protest, check out more about demands arrest of those involved in Red Fort violence, True Scoop News, Punjab & Farm Laws