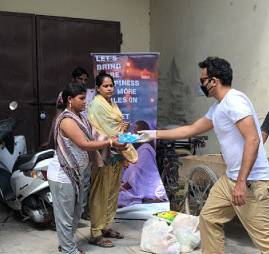 Akash had received several calls from people in nearby slums with whom he had developed a rapport while conducting several community empowerment programs with daily wage workers.

They had no food and money to survive even the next few days. That’s when he and his team of volunteers took permission from the administration and started reaching out to slums in Chandigarh and Mohali with food rations.

Many of these people were migrant workers who were unable to reach their hometowns.

“My heart churned at this thought. We are trying to reduce their anxiety through whatever means we can - giving them our phone numbers, checking on them periodically, meeting their needs. Because more than the food, they need assurance that somebody has their back.”

Akash and his group of volunteers step out daily to distribute relief care packages. Till now they have reached more than 1,000 families. They also provided hand sanitisers, PPE kits and masks to health care workers.

Even though Akash and his team take all necessary COVID safety precautions, they are met with scepticism and fear from some.

When asked about what his family thinks, “When I tell them the stories of people I meet during the day, they say somebody has to do this”, says Akash with his voice filled with pride.