After Himanshu Kalia nearly lost his father due to delayed treatment, he and his wife Twinkle started free ambulance services to ferry those in need of urgent medical attention across Delhi 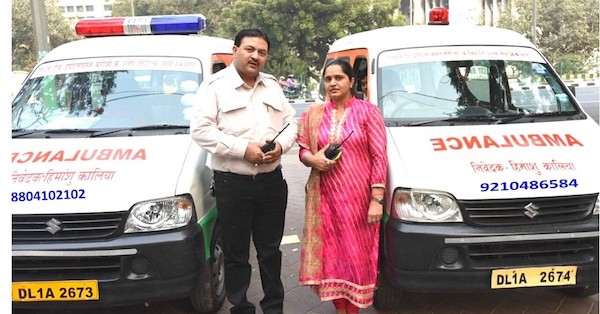 Twinkle Kalia, a Delhi-based ambulance driver, was driving her six-month-old baby from Inderlok to Shastri Nagar in March 2015. She spotted a group of people racing towards her while waiting at a traffic signal, dragging an unconscious youngster who had lost a leg and was bleeding heavily. She was asked to take the youngster to the hospital by the group.

And so she did, within a matter of four minutes.

Twinkle said "The youngster lost his leg, but the doctor who treated him indicated that any additional delay would have erased the possibilities of saving him completely.”

As an example, Twinkle and her husband Himanshu have countless stories to tell about saving lives through their free ambulance services. Both operate as insurance agents and have assisted thousands of people in Delhi who are in need of medical help since 2002.

Himanshu was inspired to fight for this cause after a personal experience when he was 14 years old. “In 1992, my father was involved in an accident and was sent to the hospital. We couldn't afford to hire an ambulance or an auto-rickshaw because we didn't have enough money. The residents of the area also refused to assist. We were able to save enough money to book an auto-rickshaw. He says that, despite the fact that the accident occurred at 7 p.m., his father was only taken to AIIMS at 2 a.m. He didn't get the first several hours of treatment, which are critical. Himanshu's father was put into a coma as a result of the delay, which had devastating consequences for the family.

It took his father two years to recover. As Himanshu recovered from the trauma, he vowed to himself that he would never let another woman or child go through what his family had gone through.
Also Read: #FirstPositiveStory:Meet this IPS officer from Haryana who feeds 2000 Needy/day for free, Inspires 3000 others


As a result, their parents gave the couple an ambulance as a gift for their wedding in 2002. Twinkle agrees that it was an odd request, but Himanshu's storey of nearly losing his father was the motivation to make a difference in the lives of others.

Since then, the couple has been working around the clock to provide free transportation to those in need. They provide their services through the Shahid Bhagat Singh Help and Care for Society Trust. They had a hard time identifying patients who couldn't afford the treatments at first. To increase awareness, they put up posters and distributed phone numbers. They gradually began to receive calls for help.

“We perform final rites, cremate bodies that have been abandoned by their families, and offer other ambulance services to those who cannot pay them. “During the COVID-19 epidemic, when the family were afraid of infection, such occurrences increased,” Himanshu explains.

The pair has grown to a fleet of 14 ambulances and ten drivers in the last 20 years. During the day, the drivers work, while the pair takes up the night duties. They have aided 80,000 patients so far.

Yogesh Saini, a teacher, is one of them. “On April 25, 2021, during the second wave of the COVID-19 epidemic, I called Twinkle madam in a panic, pleading for assistance for my former teacher's 80-year-old mother. Her oxygen levels had dropped to 39 per cent, and despite contacting various companies, the family was unable to find a cylinder. According to Yogesh, Twinkle was the one who delivered the oxygen cylinder within three hours and rescued the patient. “Thanks to the couple's rapid help, the old lady recovered in May,” he says.

A life of sacrifices

According to Himanshu, assisting such patients is a 24-hour job. The pair goes to bed at 4 a.m. and wakes up at 9 a.m. to prepare for the next day. “We have to manage selling insurance policies to potential customers with responding to emergency calls. We don't have established lunch or supper times and eat whenever the situation allows. We occasionally have to cancel scheduled sessions with insurance clients in order to attend the patients in need,” he says, adding that they also lose out on possible earnings on such days.

He goes on to say that, in addition to the financial sacrifices, the couple is also suffering on a personal level. “As our income declines, it has an impact on our personal lives. We get notifications from schools all the time about late fees for our two girls. We occasionally run out of money to keep the vehicles running, and the drivers' salaries are put on hold. We have a lot of debt,” he says, adding that the pair has dues worth Rs 7 lakh.
Also Read: #FirstPositiveStory: A Punjabi man sold jewellery to save his beekeeping business; makes Rs 4 cr from it

People believe, according to Himanshu, that trust is supported by the state or the federal government. “There is no consistent financial assistance, but some individuals provide assistance on a case-by-case basis. Twinkle was awarded the Nari Shakti Puraskar by the President of India in 2019, but our children were on the verge of being expelled from school for not paying their fees on time. Awards do not help us meet our financial needs,” he adds. Twinkle is also afflicted with health problems. In 2007, she was diagnosed with hepatitis B, and in 2020, she was diagnosed with breast cancer. “I've had two operations and several rounds of chemotherapy. However, I am dedicated to assisting those in need. We were upset at times because we couldn't live normal lives, but the benefits and goodwill we earned are far more rewarding,” Twinkle explains.

Himanshu claims to have three blockages in his cardiac arteries, which he has to be treated for. He continues, “But that can wait as long as more people benefit.”

The duo has received countless honours for their sacrifices and dedication. The Delhi Gaurav Award, given in 2015, and the most recent award, given in 2021 on International Women's Day, are two examples.

Despite their achievements, Himanshu claims that the couple wants to do more. “In Delhi, tens of thousands of accidents are reported each year. Five extra ambulances are required to save more lives. Some folks want to help but are unsure how. He continues, "We urge such people to assist us and donate to our cause."

“Such assistance will enable us to continue our services, pay off some of our debts, and focus more on our professional lives in order to enhance our earnings,” he says.

Even though they expect help from others, the couple believes that their problems will be alleviated by earning the goodwill that comes from helping the needy.