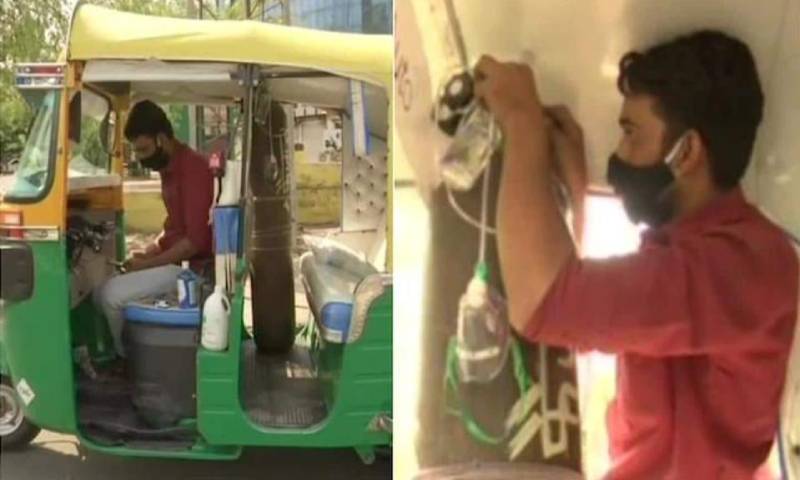 At times when the nation is fighting against the deadly second wave of coronavirus and has witnessed an unbearable stretch in healthcare facilities, there exist people who are in full swing to aid others. Amid the oxygen crisis and bed shortages pan India, from celebrities, influencers to a layman, everyone is doing their bit to save the life of others.

Apparently, life is as uncertain as this pandemic was and a mere setback in life shook us badly. However, there still exists hope in a form or another. To fill up your day with positivity, True Scoop presents you #FirstStoryPositive that will inspire you all to become selfless and to extend help to others when in need not only in this hour of crisis but, anytime and anywhere.

Recently, an auto-rickshaw driver from Bhopal, Madhya Pradesh has opted to give a makeover to his auto amid the unprecedented surge in the infection cases pan India. He has converted his three-wheeler into a fully equipped service ambulance to serve the mankind.

Notably, this auto-driver has been identified as Javed Khan and he is providing ambulance facility free of cost to people at times when there prevails oxygen crisis, shortage of beds, and ambulances.

Javed has turned his auto into a fully equipped ambulance with necessary medical amenities including an oxygen cylinder, sanitizer, oximeter, and PPE kit.

While speaking to an eminent media house Javed Khan said, “In the past few days, I have had seen on social media, that people are forced to carry their relatives on the shoulder or pull them on carts due to ambulance unavailability. It was heart-wrenching to see mankind suffer. It was then I decided to do something for humanity.”

To make the ambulance fully equipped he opted to sell his wife’s gold necklace for Rs 5,000 and bought an oxygen cylinder for his auto-ambulance. However, he refuels the auto with his money.

When he asked how he manages to obtain oxygen amid the oxygen crisis, Khan said, "There is a factory in Govindpura, we get oxygen refilled from there. This task is weary too as we have to stand in the queue for about 4-5 hours. The cost of refilling the oxygen cylinders ranges from Rs 450-550."

"It is completely free. I have shared my mobile number on social media platforms, it is 7999909494. Whoever is in trouble and is not able to get an ambulance can call me. I am ready to help people 24 hours," Khan further added.

It may be noted here that Javed is extending help towards the mankind from the past 15-20 days in Bhopal.