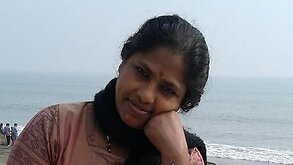 Abandoned by her own mother at the age of four Baby Halder experienced things worst than a nightmare. The 4-year-old child grew with her father and her stepmother who forced her to drop out of school in 6th class. Suddenly one day she saw herself sitting in a mandap thinking that it’s a normal pooja but was asked to accompany the old man to his home. Yes, she was married at the age of 12 to a man 14 years older than her.

When girls of her age used to play and spend their childhood days cheerfully, Baby became a mother. First an abusive father then an abusive husband Baby’s fate was following her badly. One day in the year 1999, 25-year-old Halder managed to escape her husband and ran off to Delhi with her 3 children. Her destiny had few more struggles planned. In Delhi, she started working as a domestic help in different homes where she was often humiliated for being a single parent.

Her stars were about to change when she started working at a writer’s home. Probodh Kumar was a writer and a retired anthropology professor in Gurugram. Every time while working in professor house her hands used to slow down at the bookshelf like something is calling her from inside to stop and giving signs of positivity.  The professor her gaze for the books and from that day he started encouraging her to read. He motivated her to read many books written by notable writers including Amar Meyebela. Narrating about this in an interview Baby said, “reading Amar Meyebela felt like I was reading my own story aloud”.

One fine day when professor Prabodh had to visit south India for a trip he gave Baby a blank book and a pen. He asked her to write in it until he returns. To this Baby was utterly confused that what will she write and will she be able to write something after 20 years. What will she write? The biggest question of the time; her abusive father, the dark days of her married life, the domestic violence, the labor pains she faced at the age of 13, or the memory of her sister being strangled? Slowly and gradually she began forming words and sentences. There was a feeling of liberation as she went on with it. When finally the professor returned, Baby had written 100 pages. Yes, full 100 pages all by herself!

The professor was in tears after reading the final manuscript of Baby’s first-ever book. ‘Aalo Aandhari’ (light and darkness) was the name of her autobiography. Many reading enthusiasts compared her book with ‘the diary young girl Anne Frank’. After many rejections, Aalo Andheri first saw the shelves in 2002. The English translation of the book was published in 2006 and soon became a bestseller. Today the book is translated into 13 foreign languages and 21 local languages. Later on, Halder wrote two more books and said, “writing gave me the identity I never had. It is my life”.

A girl who never saw the sight of a notebook for 20 years emerged as a bestseller writer. Baby’s story is nothing but a source of inspiration for all of us who in spite of having all the facilities don’t find ourselves capable enough of something extra-ordinary. Giving up on life and never taking a stand for yourself will make things worse. The way Baby refused to tolerate the violence and took charge of her own life was the moment her stars began to change. As it is said ‘God helps those who help themselves.