According to Forbes, billionaires in India on the list have seen a rise of 50% in their fortune during the pandemic year. 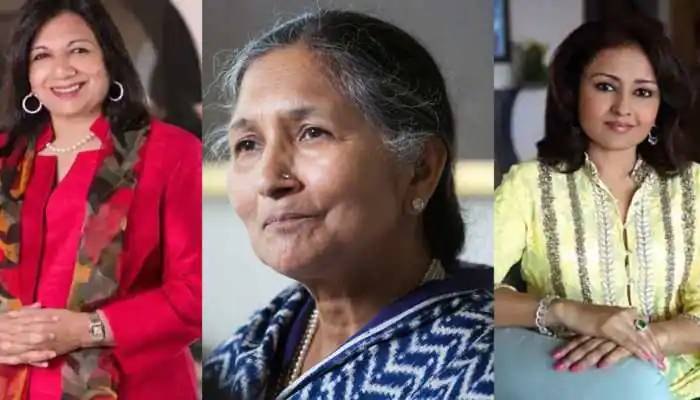 Forbes India has released the list of 100 richest people in the country, which features six women entrepreneurs.

Savitri Jindal of the OP Jindal Group has taken the top spot on the list as the richest woman in the country with a total wealth of $18 billion (roughly ₹ 13.46 lakh crore). Her wealth has seen a  jump of over $13 billion (nearly ₹ 9.72 lakh crore) in just the past year. 71, Savitri Jindal, ranks seventh on the Forbes list.

The second wealthiest woman entrepreneur on the Fobes list is 76 years old - Vinod Rai Gupta of Havells India, enjoying the 24th spot on the list. Gupta's wealth multiplied to $7.6 billion nearly to ₹ 5.68 lakh crore in 2021.

The third spot is acquired by Leena Tewari, 43, of USV Private Ltd, a pharmaceutical and biotechnology firm located in Mumbai. Her overall rank is 43 and the entrepreneur's net value is $4.4 billion that is almost close to Rs. 3.28 lakh crore.

The next woman entrepreneur is a 35-year-old young woman - Divya Gokulnath, Byjus's co-founder, cherishing the spot at 47 on the Forbes list.  After the Covid pandemic compelled the schools to close down and educational institutions to move online, digital learning platforms like Byjus saw rapid growth not only in terms of subscribers but also fortune.  Ms Gokulnath's wealth surged by $1 billion nearly ₹ 7,477 crores in just a year to $4.05 billion (nearly ₹ 3.02 lakh crore).

68, Kiran Mazumdar-Shaw, Biocon chairperson has got the fifth spot on the Forbes list. Even though her overall rank is 53, her wealth has decreased in the last year. In 2020, Shaw owned $4.6 billion (nearly ₹ 3.43 lakh crores) of wealth, however, this year her net wealth depreciated to $3.9 billion (nearly ₹ 2.91 lakh crore).

Next on the list stands Mallika Srinivasan of the Amalgamations Family, the owners of Tractors and Farm Equipment Limited (TAFE), with a net worth of $2.89 billion (nearly ₹ 2.16 lakh crore) and holds the 73rd position on the Forbes India richest people list.

Assembling a list of the richest businesspersons for India, Forbes India releases the names of the wealthiest people in the country every year.

This year again Reliance Industries chairman Mukesh Ambani, tops the list being the wealthiest Indian for the 14th consecutive year. He added $4 billion (nearly ₹ 2.99 lakh crores) to his net worth in 2021.

On the second spot is Gautam Adani with close to $74.8 billion fortune, only $17.9 billion away from Ambani, while Industrialist Shiv Nada, founder and chairperson of HCL Technologies retained his third spot with an increase in wealth by $10.6 billion. His total net worth has now risen to $31 billion.

Forbes stated that India's 100 richest are now worth $775 billion.