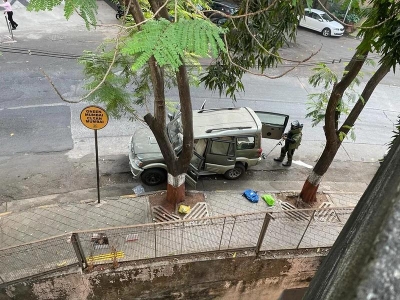 As the Antilia Security Scare case snowballs into a huge political controversy that could upset the equations in the Maha Vikas Aghadi (MVA) government in Maharashtra, the biggest question arises here is that how the letter of ex-Mumbai Police Chief Param Bir Singh leaked to the media.

There are several key questions that still remain unanswered in the case, also it is worthwhile to see if the accusations of ex-Mumbai Cop would change the political implications for CM Uddhav Thackeray or the letter itself is an another conspiracy to shake the present government in Maharashtra.

Here’s a complete timeline of how the events unfolded in the SUV-Ambani Case:

On Feb 25: An SUV filled with at least 20 gelatin sticks was found abandoned outside Antilia, the lavish multi-storied home of billionaire industrialist Mukesh Ambani. Late in the night on the same day, Mumbai Police spokesperson DCP S. Chaitanya revealed that two persons had abandoned an SUV and a letter has been found inside the vehicle, but declined to reveal its content.

On Feb 26: The Mumbai Police registered an FIR and launched a massive manhunt to track the two persons who abandoned an SUV with 20 gelatin sticks near the landmark Antilia builidng, the home of Reliance Industries Ltd (RIL) Chairman Mukesh Ambani.

The FIR was registered at the Gamdevi Police Station invoking Indian Penal Code Sec. 286, 465, 473, 120(b), 506(2) pertaining to explosives, forgery, criminal conspiracy and criminal intimidation, and Sec. 4 of Explosives Substance Act for attempt to cause explosion, or for making or keeping it with intent to endanger life or property.

On March 5: Maharashtra Police recovered the body of a Thane-based businessman Mansukh Hiren, whose stolen SUV with 20 gelatin sticks was found parked near Antilia. Reported missing by his family, the police recovered his mud-caked body around 10.30am from Reti Bunder Road near Thane Creek. Body was then sent for an autopsy.

Hiren's suspiciously parked SUV, as reported by Police was apparently driven to the spot near Antilia in the wee hours of February 25 but was detected only after around 12 hours by some locals who alerted the Police.

The case on March 5 late in the night was handed over to the Anti Terrorist Squad (ATS).

On March 6: Nearly 18 hours after the autopsy on businessman Mansukh Hiren, his distraught family accepted his mortal remains for the last rites. Close relatives, including his brother, went to a hospital in Kalwe, completed the relevent formalities and took charge of Hiren's body.

However, the autopsy report comprising the findings and opinion of the four-member medical team were kept in 'reserve' while his viscera were preserved for a forensic analysis.

Maharashtra Home Minister Anil Deshmukh, Director-General of Police Hemant Nagrale and other officials had a meeting on March 6, ostensibly to discuss the Hiren issue, review the probe by ATS and related matters. The officials though then remained tightlipped.

On March 8: Maharashtra Home Minister Anil Deshmukh said that the Anti Terrorist Squad (ATS) had registered a murder case and launched investigations into the mystery of Thane businessman Mansukh Hiren's body recovery from the Thane Creek wetlands on March 5.

The ATS has set up around 10 investigation teams to probe different aspects of the probe, which visited the Hiren family and the marshes from where his body was fished out. On a complaint by Vimala Hiren, the ATS then registered a FIR under Indian Penal Code's Sec. 302 (murder), 201 (causing disappearance of evidence), 34 (common intention), and 120B (criminal conspiracy), against some unknown persons.

On March 8 only NIA took over the probe to which CM Thackeray said that it's clear that the opposition BJP does not have faith in the "government machinery", as governments may come and go, but the administrative set-up remains the same and one must "trust it".

On March 9: The wife of slain businessman Mansukh Hiren accused Assistant Police-Inspector Sachin Vaze of killing her husband, prompting the Opposition BJP to demand the policemans suspension and arrest.

The Maharashtra Assembly witnessed an uproar that day after it emerged that Vimla Hiren had lodged an FIR with the Kalachowki police station on March 7, in which she has stated, "I suspect (API) Vaze must have murdered my husband", and demanded an investigation”.

She made some shocking revelations in her complaint. She said that since November 2020, the SUV was given by her husband to Vaze, who returned it on February 5 as its steering wheel was getting jammed.

“On February 17, Hiren had left his Thane home for Mumbai in the same Scorpio but the steering got jammed and he left it near the Mulund toll post and took off in a private taxi. The following morning, Hiren and a mechanic returned to the spot but the SUV was missing, following which he lodged a complaint with the Vikhroli police station on February 18”, she said in police complaint.

On March 10: After Vimla M. Hiren, the widow of slain Thane businessman Mansukh Hiren pointed an accusing finger at Mumbai Crime Branch officer Sachin Vaze, the government transferred him from crime branch to other department.

On March 12: In the case, the Tihar jail officials seized a mobile handset and SIM card on which a Telegram account in the name of 'Jaish-ul-Hind' was created.

On March 13: Sachin Vaze who was under the radar of the NIA, hinted at ending his life. In an ominous WhatsApp status, Assistant Police Inspector Sachin Vaze, who was likely to be probed by the National Investigation Agency (NIA) and the Maharashtra Anti Terrorism Squad (ATS) -- claimed he was sought to be implicated in a similar incident earlier.

In a short update, disturbed Vaze hinted at the possibility of ending his life as the case investigations get underway, saying: "I think the time to say goodbye to the world is coming closer."

On March 14: Sachin Vaze was arrested and sent to NIA custody till March 25. He was under probe by the NIA and the Maharashtra Anti Terrorism Squad (ATS) for allegedly planting 20 gelatin sticks in the SUV which was found outside Antilia building on February 25, followed by the death of Thane businessman Mansukh Hiren on March 5.

An officer of the 1990-batch of the Maharashtra Police cadre, Vaze, 49, had earlier been suspended for his role in the custodial death of Khawaja Yunus, a suspect in the 2002 Ghatkopar bomb blast case.

On March 15: The NIA summoned another Mumbai Police officer Riyaz Kazi for questioning in connection with the case. Besides Kazi, at least three other Crime Intelligence Unit (CIU) policemen were questioned by NIA in the same case.

On March 16: The NIA started probing how and why the Mumbai Police reportedly collected CCTV footages from the building where suspended Crime Intelligence Unit (CIU) officer Sachin Vaze resides. The NIA seized a black colour Mercedes Benz which it said was used by arrested Mumbai police official Sachin Vaze. Besides this, the NIA also seized Rs 5 lakh cash, a currency note counting machine and some clothes.

On March 17: The Maharashtra government shunted out Mumbai Commissioner of Police Param Bir Singh and replaced him with current Director-General of Police Hemant Nagrale.

Former Chief Minister of Maharashtra Devendra Fadnavis too commented on the issue and said that Shiv Sena chief Uddhav Thackeray had called him in 2018, requesting him to reinstate Sachin Vaze in the police.

He also pointed out fingers saying the owner of the explosives-laden SUV, Mansukh Hiren, did not commit suicide but was murdered.

On March 18: Kumar Ketkar, the Congress MP from Maharashtra in the Rajya Sabha raised the issue of death of Mansukh Hiren. The Congress MP sought an investigation into the role of the suppliers who had provided the gelatin sticks, which were found in the Scorpio parked outside the house of Mukesh Ambani.

Besides, Bharatiya Janata Party MP Narayan Rane also sought the resignation of Maharashtra Chief Minister Uddhav Thackeray as the government grapples with the fallout of the SUV case.

On the same day, NIA team met newly-appointed Mumbai Police Commissioner Hemant Nagrale at his office. NIA team also surveyed the elite Crime Intelligence Unit (ICU) of the Crime Branch which functions under the city police chief and handles some of the most sensitive cases, many of which were handled by the arrested-suspended Assistant Police Inspector Sachin Vaze in the last one year or so.

On March 20: The NIA attempted to "recreate" the crime scene in which an SUV (Scorpio) with 20 gelatin sticks and a threat note was parked near the Antilia. Secured by a large posse of Mumbai Police, the NIA made Vaze 'walk down the road' near Antilia from the spot where the SUV was recovered, to check his gait, movement, timings, etc, to tally with the investigations and evidence collected so far in the case.

Yesterday only, the NIA received a notification from the Ministry of Home Affairs to probe the case of death of Hiren. And NIA said that they will soon register a case.

After ‘letter bomb’ the Chief Minister’s Office said that the letter was not received from the IPS officers known official email id, even as Home Minister Anil Deshmukh charged Singh with conspiracy and threatened to file a defamation case.

Besides, the Maharashtra Anti-Terrorism Squad (ATS) arrested a dismissed policeman and a bookie in connection with the mysterious death of Thane businessman Mansukh Hiran. Convicted Mumbai policeman Vinayak B. Shinde, 51 and cricket bookie Naresh R. Gor, 31, were held as part of the investigations into the death case of Hiran.