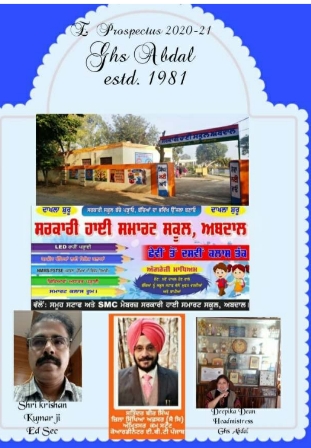 The government schools in Punjab have launched another initiative to enhance enrollment. Brimming with confidence over the achievements, including, sprucing up infrastructural facilities, qualitative improvement in education, excellent results in Board Examinations, performance of government school students in various competitive examinations, cultural, sports and other co-curricular activities, the school heads are preparing attractive, colourful and eye catching "e-prospectus", highlighting the distinctive features and achievements of the government schools to mobilise the masses to get their wards admitted in government schools.

The Department has constituted "Enrollment Booster Teams” right from the state to block level in the state to sensitise people about the massive improvement in infrastructure and quality in teaching-learning in government schools.

"The e-prospectus is an innovative idea to showcase the revolutionary changes during the past four years in general as well as distinctive features and achievements of the government schools in particular", said Satinderbir Singh, District Education Officer-cum-State Coordinator, Enrollment Booster Team.

Besides, the concerted, consistent and dedicated efforts being put in by the school staff to provide quality education , taking extra classes and keeping in touch with the students, parents and different sections of the society through social media even during the turbulent period of pandemic COVID-19 has succeeded in bringing in positive change in public perception. Consequently, the government schools witnessed about 15 per cent increase in enrollment during the academic session 2020-21.

Deepika Dean, Principal, Govt. High school, Abdal, said that the school had prepared e prospectus and flexes to make the people aware about distinctive features of  the school, including, optimum utilisation of digital applications, e-content in smart classrooms, Smart Computer and science Labs, "A" grade sports facility in games of Hockey and Volleyball available in the school. With the mobilisation of the village panchayat and community, the school has succeeded in getting donations in the shape of land and a community hall for extension of infrastructure facilities, she added.

"The government schools are aiming to mobilise people to ensure further increase in enrollment. The e-prospectus is being circulated among the target sections of the society by making use of the vast social media network being created by the education department. The schools have their own Facebook pages and Whats App groups of students, parents, sarpanches, anganwadi workers, SMCs and other sections of the society”, she said.

“The e-prospectus is providing an opportunity to the parents to know about the government schools in their vicinity without spending a single penny. It would help in mobilising them to get their wards admitted in government schools to avail the benefits of infrastructural as well as quality education facilities and various student welfare schemes in government schools", said Parmod Bharti, Media Coordinator, State Enrollment Booster Team.

He added that "Enrollment Booster Teams” at the district and block levels had also been mobilising school heads and teachers to come forward for massive public awareness activities including door to door enrollment campaigns, Nukkad Nataks, distribution of pamphlets, Affixing flexes, hoardings at public places, announcement via public address systems of religious places in their respective areas to mobilise community to avail the benefit of the better infrastructure and quality education facilities in government schools.