From 'Guilty Minds' to 'The Verdict', These 5 intriguing courtroom dramas are a must-watch on OTT

Web programs based on the courtroom drama genre are becoming increasingly popular. So, here's some information regarding them. 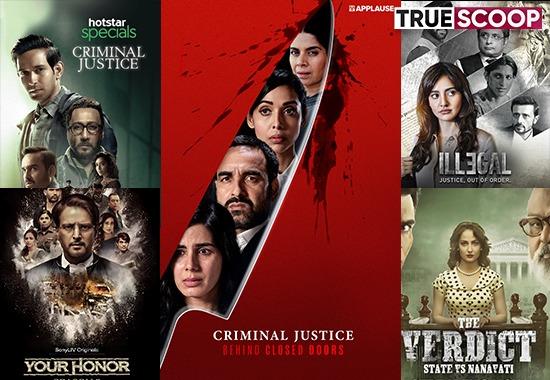 Different types of movies and web series are now available on the OTT platform, similar to movies. So far, films have been made in a variety of genres, including comedy, romance, action, biography, and thriller. However, web programs based on the courtroom drama genre are becoming increasingly popular. So, here's some information regarding a web series based on a courtroom drama:
Guilty Minds, a courtroom drama online series recently released on Amazon Prime. Khanna & Associates and For the People Associates are the two law firms at the center of the story.
• Criminal Justice which released on the Disney Plus Hotstar OTT platform
Tigmanshu Dhulia and Vishal Furia directed Criminal Justice, a courtroom drama. Sridhar Raghavan wrote the series, which is based on a British television series of the same name that aired in 2008. Its plot revolves around a young man named Aditya Sharma, who is falsely accused of the murder and rape of a young woman. The prominent characters are Pankaj Tripathi, Vikrant Massey, Jackie Shroff, Anupriya Goenka, and Meeta Vashisht.
• Illegal – Justice, out of order which streams on VOOT
Sahir Raza directs this courtroom drama series. Neha Sharma, Akshay Oberoi, Kubra Sait, Piyush Mishra, and Satyadeep Mishra play the key characters in the series. The plot centers around Niharika Singh, a lawyer who practices law at Janardan Jaitley's residence. As the series unfolds, she is forced to put her personal life on hold to investigate rape and sexual assault cases.
Also Read: Satyajit Ray 101st Birth Anniversary: Made 37 movies honoured with 35 awards, Conferred with Oscar

• The Verdict: State Vs Nanavati which is streaming on Alt Balaji
‘The Verdict - State Vs Nanavati’ is produced by Ekta Kapoor and Irada Entertainment. The story is based on the 1959 Indian court case KM Nanavati vs the State of Maharashtra, in which an Indian Naval Command officer, Kawas Nanavati, was charged with the murder of Prem Ahuja. The film 'Rustom,' starring Bollywood actor Akshay Kumar, was also based on the same case.
• Your honor which got released on Sony Liv app
Jimmy Shergill, Meeta Vashisht, Parul Gulati, and Varun Badola feature in the key roles of Your Honor, an Indian version of the Israeli TV series Quodo. The movie follows a prominent judge from Ludhiana who loses his sense of morality and justice after his son is involved in a hit-and-run accident.
• Criminal Justice: Behind Closed Doors streaming on Disney Plus Hotstar
This Series Door is a courtroom drama written by Apoorva Asrani and directed by Rohan Sippy and Arjun Mukherjee. The protagonist is a housewife who murders her perfect husband in front of her daughter. Pankaj Tripathi, Kirti Kulhari, Khushboo Atre, and Jishu Sengupta play the key characters in the film