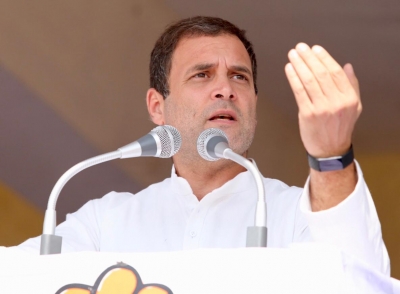 Amid massive surge in Covid cases, Congress leader Rahul Gandhi on Saturday attacked Prime Minister Narendra Modi for the continuing crisis. He alleged that it's a Modi made disaster.

Rahul Gandhi has stepped up the attack on the government since Thursday after some hospitals reported shortage of beds and ventilators.

The Congress leader said in a tweet, "There is no test, no bed in the hospital, no ventilators, no oxygen, no vaccine, bus utsav ka dhong hai (a festive pretence)... PM cares?"

This is the third consecutive day that the country has registered over two lakh cases. India has on Friday reported 2,17,353 new cases and 2,00,739 on Thursday.

Also in the last 24 hours, there were 1,341 new Covid-19 fatalities, the third consecutive day with over a thousand deaths. This took the overall death toll in the country to 1,75,649.

Get the latest update about BJP Government, check out more about Sonial Gandhi, India News, exporting vaccination to other countries & Funeral and burial ground