#Ground Report- Jalandhar: Rs 407 cr worth constructed roads in dreaded condition, will VB do an inquiry?

This problem has been prevailing in the city for a long time back and no action has been taken till now to solve it. 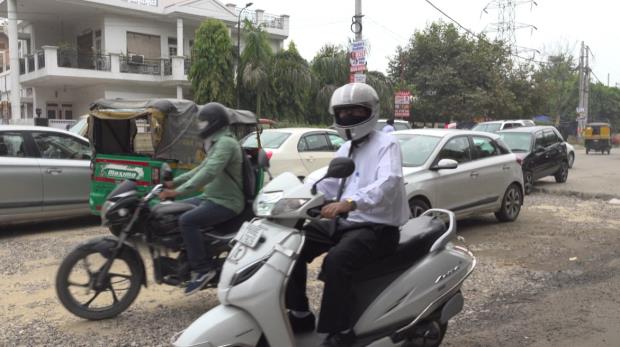 According to the sources, approximately 407 crores have been spent on the construction of roads in Jalandhar, but the condition and the reality of roads contradict the amount spent.
TrueScoop conducted a ground report on the condition of roads in Jalandhar and the problems that common people have to go through due to this.
Astha Singh, resident of Urban Estate said, “I face a lot of problems due to the poor condition of roads. It takes more than an hour for me to reach my office although it is not that far. “
Aman Singh, a resident of Model Town said that people are facing problems because of the potholes. He has seen many accidents happening in front of his eyes.
People have requested the concerned authorities to solve this problem but in vain. No one can save them from facing these problems.
Jalandhar instead of becoming a smart city has turned into a city full of potholes. The roads in Jalandhar have created a huge menace for the residents of the city. As the condition of roads is deteriorating day by day it has given rise to problems like traffic, accidents, delay in reaching the destinations, etc.
When we discussed the same issue with the Mayor, he said that no construction of the road that comes under his area is pending. He also mentioned that if any road in his area is not repaired or constructed till now, it is because of the rainy season.
This problem has been prevailing in the city for a long time back and no action has been taken till now to solve it.
The question that arises is why no solution has been found till now to solve the problems of people.
Will the Vigilance Bureau conduct an inquiry on where the money has been spent?