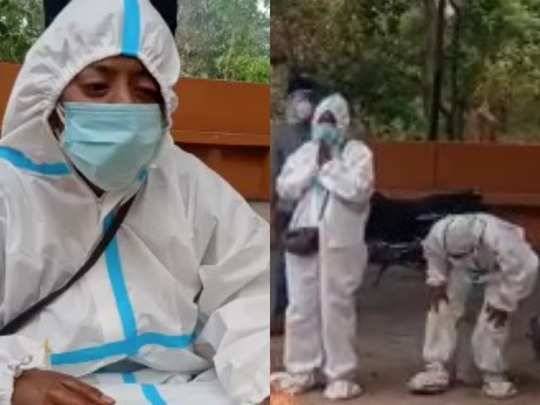 India’s second Covid-19 wave is lethal and is claiming thousands of lives daily. With a shortage of oxygen, beds and other essential drugs, the country is witnessing something that nobody would have ever thought. One such heartwrenching story is of Tanvi Saxena Shajapur, Madhya Pradesh, who lost her 61-year-old father and 32-year old brother to COVID in just a span of four days. The family is left with no men now.

Tanvi, 25, had to offer fire first to her brother and four days later, to her father.

On Monday, Tanvi wore a PPE kit at the cremation ground and had to offer to fire her father’s dead body.

The onlookers were in tears and said - ‘God, have mercy.’

As per information, Tanvi used to rush to Shajapur district hospital after her father Avadhesh Saxena (retired teacher), mother Karuna and brother Shubham were infected with coronavirus on 28 April. She was alone handling everything as all three members of her family were undergoing COVID treatment at the district hospital. Tanvi’s brother succumbed to covid a day after he was hospitalized. She reached the cremation ground with her brother’s dead body to perform the last rites. Their mother too ran from the hospital and reached the Shantivan cremation ground barefoot after she heard the news of her son’s death. Tanvi and her mother both were present at Shubham’s last rites.

By Monday, Tanvi’s mother’s condition had improved but father Awadhesh couldn’t survive. The young girl in a span of four days again had to visit the Shantivan with her father’s dead body to bid goodbye, while her cousin Chetna was consoling her.

After finding out the havoc that the coronavirus had brought on Tanvi’s family, Dharmendra Sharma and journalist Manish Soni of the Gauraksha team arrived to help the victim’s family. They both help Tanvi with her father’s funeral preparations like collecting woods. While people in her locality have assured Tanvi of help and support in this hour of grief.

Tanvi’s immediate family members were present with her throughout this time, as deceased Awadhesh Saxena was considered the head of the family. Tanvi’s cousin Chetna, her father and brother were all seen bidding goodbye to Mr Saxena with folded hands.