Around 180 people died due to floods in Germany; worst natural disaster in more than half a century. 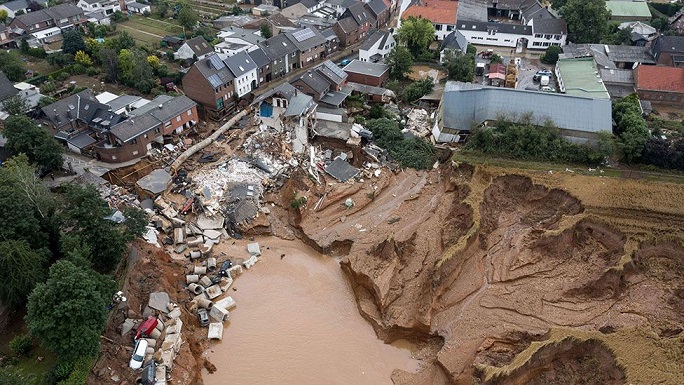 Germany is currently facing the havoc of Massive Flood. A landslide occurred in the flood-ravaged city of Blessem in northern Germany and killed many people. The havoc of the flood is so terrible that the banks of the Erfurt River have burst, and a huge sinkhole has formed. Pictures of this giant sinkhole are going viral on the internet.

German Chancellor Angela Merkel reached the flood-affected region of the country on Sunday to assess the damage and meet the survivors.

It is a surreal, eerie situation," she said. "It is shocking — I can almost say that the German language doesn't have words for the destruction that's been wreaked."

“The town has been destroyed, everything really, streets and houses,” Brandt said.

“My studio, 20 years of work, paintings, everything is gone. It was a painting school for children as well, now that’s gone too.”

Among his now-destroyed collection was a post-apocalyptic view of Stolberg that he had painted last year, which depicted high waters lapping around the town’s marketplace. Brandt could scarcely believe it had become a reality.

Hundreds of people were still missing or unreachable as several areas were inaccessible due to high water levels while communication in some places was still down.

Residents and business owners struggled to pick up the pieces in battered towns.

"Everything is completely destroyed. You don't recognise the scenery," said Michael Lang, owner of a wine shop in the town of Bad Neuenahr-Ahrweiler in Ahrweiler, fighting back tears.

Germany’s finance minister Olaf Scholz has said that officials must begin setting up a rebuilding programme which is likely to cost billions.

He said he would propose a package of immediate aid, totalling at least 300 million euros (£257 million), at a Cabinet meeting on Wednesday.