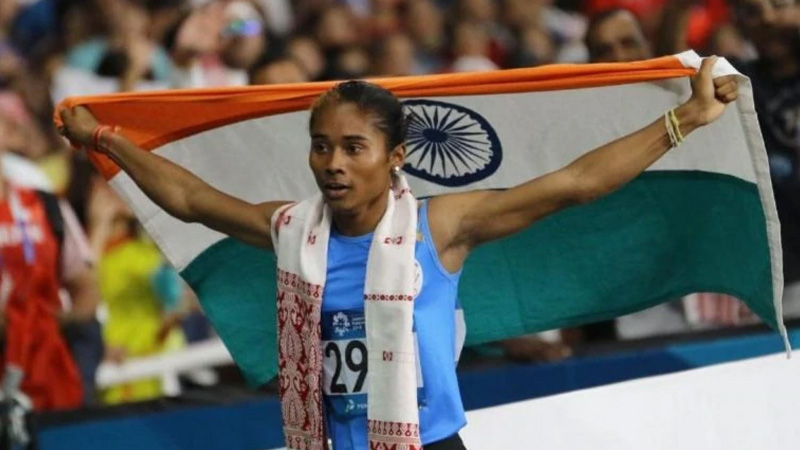 The finance minister in his budget speech said, "Our government is pleased to announce Ms Hima Das, our own 'Dhing Express', as the first recipient of this policy. She will be offered the position of Deputy Superintendent of Police."

It has also been announced by the Assam government that the rank of Grade-I officers such as DSP or magistrate would be awarded to athletes who have won medals at the Olympics, Asian Games or the Commonwealth Games. While making the announcement, Himanta Biswa Sarma said the move will encourage people to pursue a career in sports.

"Our government seeks to encourage more people to devote their time to sports and excel in it, thereby bringing laurels not only to themselves but also the state. We hope that more people will feel enthused to take sports as a career. Hence, to encourage sportspersons, who succeed in winning in Olympics, Asian Games and Commonwealth Games, I propose to bring in a policy to designate such high achievers as Grade-I officers of the state government," said the minister.

Hima Das reaction on the news was visible at the Twitter. She thanked Assam Chief Minister Sarbananda Sonowal and Himanta Biswa Sarma for offering her the DSP post.

In a series of tweets, ace athelete wrote, "I express my heartfelt gratitude to the Honourable Chief Minister @sarbanandsonwal sir and the Honourable Finance Minister of Assam @himantabiswa sir for having offering me the post of Deputy Superintendent of Police in recognition of my achievements and motivating me and countless budding sportspersons to strive for medal winning performance."

"Today I reaffirm my commitment to push my limits and excel in the upcoming Games and bring laurel to Assam and Bharat (sic.)," Hima Das said.

Earlier, opposition Congress had walked out from the assembly alleging that the state budget speech was leaked online before it was even placed in the Assam assembly. Former Assam Chief Minister and senior Congress MLA Tarun Gogoi said it is the first incident of Indian history that the complete budget was "leaked".

"It is a waste of time to read the budget when everybody knew it earlier. So, we had protested it and walked out from the house," Tarun Gogoi said.