In Indian politics, the story of Nehru and Patel has always engaged people with keen interest. First Sardar Vallabhbhai Patel has been BJP's one of the favorite icons despite belonging to the Congress party. Former Deputy Prime Minister Lal Krishna Advani has claimed that Patel from the Congress used to worship Nehru. 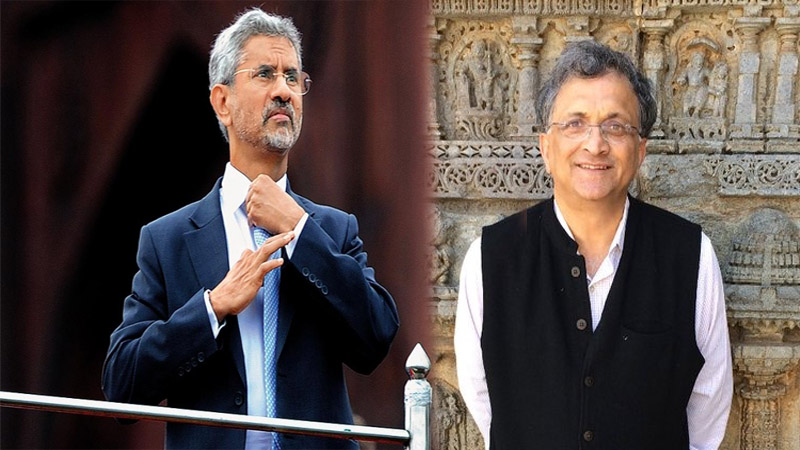 However, Prime Minister Narendra Modi has almost taken over the matter by building the tallest statue in the name of Patel. But, the Congress party did not seem to like this "usurpation" of its leader and expressed pitty against its foremost pantheon.

Although, many historians have claimed that Patel and Nehru were not rivals but partners in securing India's future on both sides of independence, but stories of Nehru-Patel rivalry keeps on emerging after a while.

External Affairs Minister S Jaishankar, a PhD in International Relations from JNU, has recently put in to this stir during a book release event. Taking this matter on twitter, in a series of tweets, Jaishankar said he has "learned" that Nehru wanted to keep Patel out of his first cabinet after Indepence.

He wrote on Twitter, "Learnt from the book that Nehru did not want Patel in the Cabinet in 1947 and omitted him from the initial Cabinet list. Clearly, a subject for much debate. Noted that the author stood her ground on this revelation."

However, Jaishankar was known to the fact that this view would bring up debate, it invited witty remarks from historian Ramchandra Guha and Congress leaders Shashi Tharoor and Jairam Ramesh, both former Union ministers.

As per Guha, it is a myth that has been "comprehensively demolished" and further accused Jaishankar for preaching fake news. "Promoting fake news about, and false rivalries between, the builders of modern India is not the job of the Foreign Minister. He should leave this to the BJP's IT Cell," said Guha.

To prove his point, Guha also posted a letter written by Nehru to Patel on August 1, 1947 inviting him to join the first cabinet of free India. On its twitter post, he also tagged Jaishankar and reminded him that Nehru called Patel the "strongest pillar" of that cabinet.

Keeping in continuation verbal spat over twitter, the external affairs minister wrote, "Some Foreign Ministers do read books. Maybe a good habit for some Professors too. In that case, strongly recommend the one I released yesterday."

Guha was not the one to relent. In his comeback, Guha told Jaishankar, "Sir, since you have a PhD from JNU you must surely have read more books than me. Among them must have been the published correspondence of Nehru and Patel which documents how Nehru wanted Patel as the "strongest pillar" of his first Cabinet. Do consult those books again."

The debate that if Nehru actually planned to leave Patel out of his cabinet appears in the backdrop of the fact that 12 of 15 Pradesh Congress Committees had in 1946 favoured Patel as their next leader and thereby the prime minister of Independent India. Rest three had disagreed. But Mahatma Gandhi thought Nehru would make a better prime minister and Patel agreed to take back his name.

The most quoted and perhaps the only source for the story that Nehru wanted to leave Patel out has been VP Menon, the bureaucrat who worked closely with the Sardar. This finds mention in HV Hodson's book,The Great Divide: Britain, India, Pakistan, published in 1969, quoting Menon following an interview by the author.

But many researchers have contested Menon's version of Nehru-Patel rivalry with regard to the first cabinet of Independent India.

However, the book-a biography of VP Menon by Narayani Basu, released by Jaishankar, cites a letter written by Nehru to then Viceroy Lord Mountbatten in the first week of August 1947. Basu says the letter did not have the name of Patel as member of the first cabinet.

Following Jaishankar tweet post, reverting on the claim Jairam Ramesh wrote a thread on Twitter revealing "truth" about Nehru versus Patel rivalry. He posted five letters that Nehru to Mountbatten between July 19 and August 4, 1947 and an office note of Nehru dated August 15. These letters and note can be seen below in the embedded tweets of Ramesh. 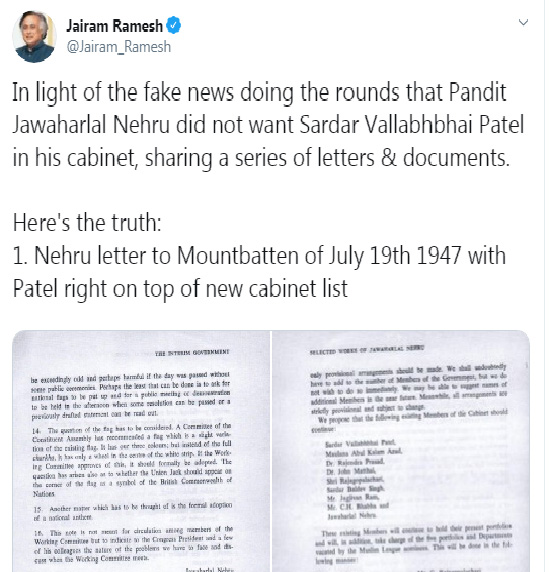 However, no last words has been said on Nehru-Patel rivalry, real or fabricated. Basu, the new biographer of Menon, has quoted Mountbatten from a letter he wrote to Hodson wherein he refers to Nehru wanting to leave out Patel saying, "I have a feeling this was such a hot potato that I probably just mentioned it quickly to Nehru at teatime and made a point of not recording it anywhere and probably not even of passing on the story." What historians have quoted is all recorded and what Basu, Jaishankar and others pick on is "not recorded" part of history.