Ever since the trailer dropped on social media, it has been trending on the top spot. 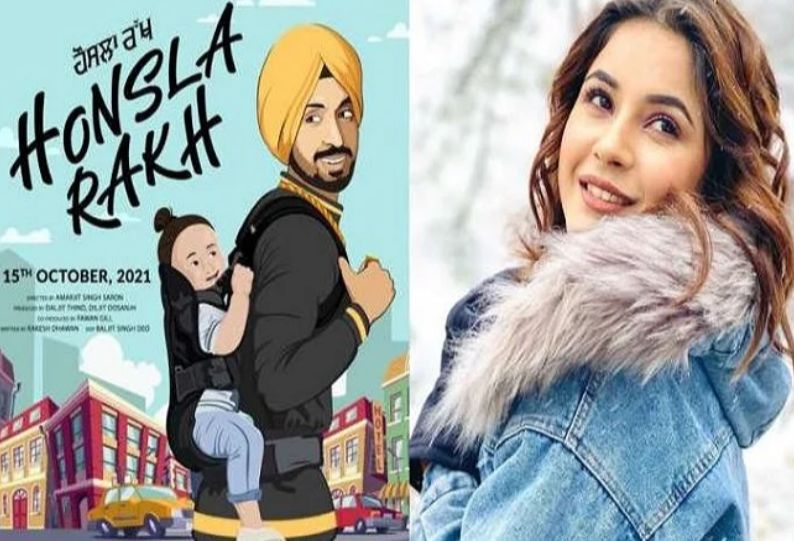 Ending the wait, the makers of ‘Honsla Rakh’ have finally released the trailer of the movie on Monday. The fans were really excited for the trailer, and they were cheering for Shehnaaz Gill, as they just couldn’t wait to get a glimpse of her work in the trailer. However, now that they have got a sneak peek into the movie, their level of excitement has been double folded, as they can’t wait to catch the whole feature film on the big screen.

Directed by Amarjit Singh Saron, ‘Honsla Rakh’ has been written by Rakesh Dhawan. The film revolves around the "emotional bond between a father and a child and love between men and women in modern times."

The film marks Shehnaaz Gill's first project after the death of her rumoured boyfriend, actor Sidharth Shukla, who died on September 2.

Fans are excited for the film after watching the trailer and heap praises on Shehnaaz.

Ever since the trailer dropped on social media, it has been trending on the top spot. Here are some of the sweetest tweets that surfaced for Shehnaaz Gill after the trailer release of ‘Honsla Rakh’:

One of the Sidnaaz fans wrote on Twitter, “Sid look your moti baby is rocking the screens #SidNaaz | #ShehnaazGill | #HonslaRakhTrailer.” 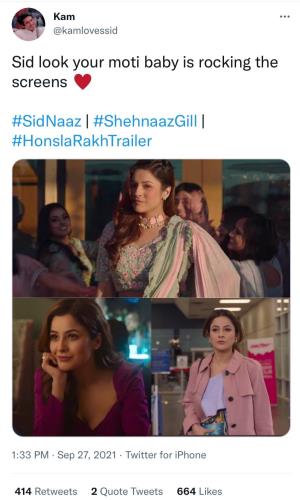 Another user wrote, “somewhere up there, he’s a million times more proud of her than us, and he’s clapping for hismoti baby. #SidNaaz #HonslaRakhTrailer.” 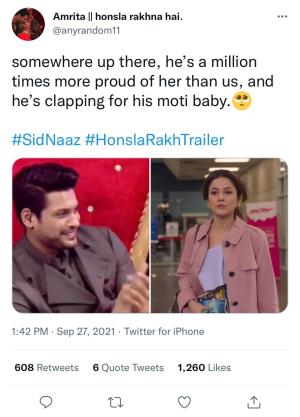 Bigg Boss contestant, Shefali Bagga praised Shehnaaz and Diljit. She wrote, “Just saw the #HonslaRakhTrailer, as Diljit Dosanjh said he is born cute, Shehnaaz Gill is a born star. Super proud of her and I hope she gets back soon out there with all her charm and good health.” 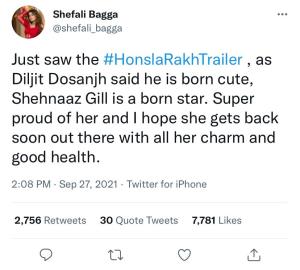