Hrithik Roshan loses his cool after a fan forcibly tries to get a selfie, Internet responds; Watch here

he visuals were taken outside a theater while he was standing beside his car when Paparazzi and several other people were surrounding the star Author : Tushar Singh 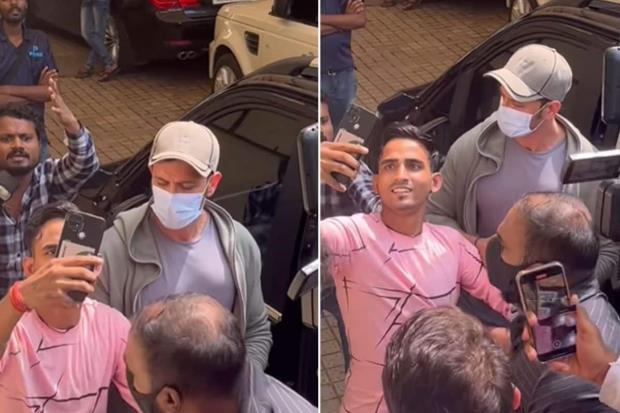 Actor Hrithik Roshan gets angry at a fan after he blocks his son’s way and forcefully tries a get a selfie.

Hrithik was returning after watching Brahmastra with his sons Rehan and Ridan. The visuals were taken outside a theater while he was standing beside his car when Paparazzi and several other people were surrounding the star.

It was then a fan who blocked his son’s way and rushes toward him to take a selfie as he was trying to get inside his car. He angrily responded to that man while his bodyguard tries to clear the way by handling people present over there.

The video is now being shared on social media with shades and various reactions coming in from the Netizens. Many defended Hrithik over his action while many others said the actor shouldn’t have behaved this way to his fan.

Jogi Release Date: Inspired by true events, Diljit Dosanjh's OTT debut all set for release; Story plot & When and where to watch

Hrithik Roshan gets angry and shouts at a fan for trying to take a selfie with him!!@iHrithik pic.twitter.com/sYzIWKUcvY