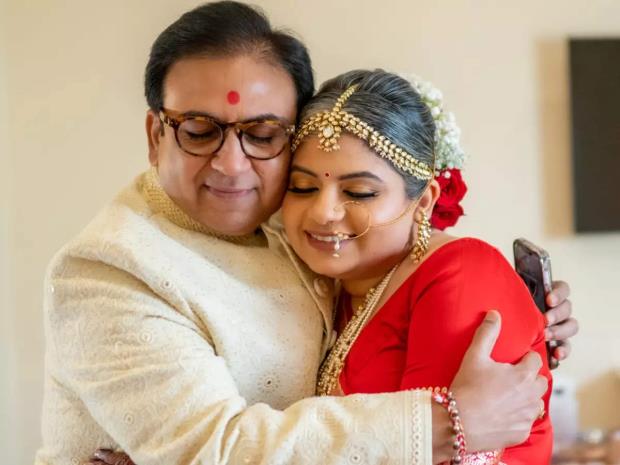 Taarak Mehta Ka Ooltah Chashmah fame Dilip Joshi's (who plays the role of Jethalal) daughter got married last month. The internet went crazy when the actor's daughter Niyati Joshi flaunted her grey hair at her wedding. Fans could not help but laud Niyati for defying societal expectations. After receiving loads of appreciation, the proud father opened up and said that he's happy that she has been able to inspire others.
Dilip Joshi while talking to Bombay Times said, “Keeping her grey hair as it is at her wedding was never an issue for us. We didn’t even imagine that people would react like this. It was never a point of discussion in our house. Jo jaisa hai woh waisa hi theek hai. Everyone reacted in such a positive way and I was happy to see that she has inspired others. I think this is how we should be; we present ourselves the way we are rather than putting on a mask.”
Niyati, who always shied away from the spotlight, was surprised when she began trending on social media. "At first, when people started talking about her, she was taken aback since she prefers to keep a low profile," Joshi says. " However, we have no control over social media. In any case, it was a good thing, and we were happy with it. It's great if this has inspired people."
Also Read: TMKOC’s Dilip Joshi shares PICS from daughter's wedding; fans say ‘get Popatlal married too’
Recently, Joshi while interacting with ETimes said, “my show is a comedy show and it’s fun being a part of it. So till the time I enjoy it, I will do it. The day I feel that I am not enjoying it anymore, I will move on. I do get offers from other shows, but I feel that when this show is doing well, why unnecessarily quit this one for something else. This is a beautiful journey and I am happy with it. People love us so much and why would I want to ruin that for no reason.”
He further said that he would not leave a good film role if any offered. Mr Dilip said, “I have so much more to do in terms of acting. Life abhi puri baaki padi hai. The movies of today are taking up such wonderful subjects, so I would never leave a good film role if I am offered. Right now I am enjoying what is happening in my life.”
Dilip Joshi started his career as a backstage artist on the commercial stage and he used to get just Rs 50 for a role. Indeed his life journey is surely inspirational!