The crash occurred on Wednesday in Tamil Nadu. 14 people were on board the IAF Mi-17V5 helicopter that crashed and killed all but one. 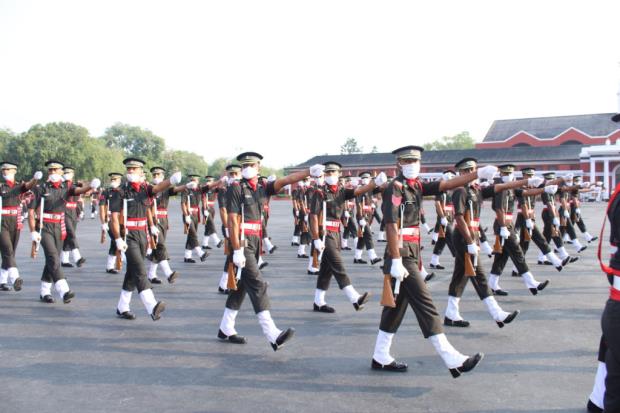 After the tragic helicopter crash which killed 13 out of 14 onboard personnel on December 8, the Indian Military Academy in Dehradun has cancelled the Commandant's Parade, the final rehearsal parade scheduled for Thursday.
The development was today announced by Academy's Public Relations Officer Col Himani Pant.
"IMA, Dehradun has cancelled Commandant's Parade (final rehearsal parade ahead of final passing out parade) that was scheduled to take place today. The decision regarding holding passing out parade will be taken after receiving instructions from the Army Headquarters," said the Academy's Public Relations Officer.
This year's 387 Gentlemen Cadet Parade will feature 319 Indians and 68 foreigners.
The parade has been cancelled after India's tri-service chief, CDS Bipin Rawat along with 11 personnel and his wife were killed in a tragic helicopter crash.
The crash occurred on Wednesday (December 8) in Tamil Nadu. 14 people were on board the IAF Mi-17V5 helicopter that crashed and killed all but one, Group Captain Varun Singh. The lone survivor Singh is being treated for severe burns.
Also Read: Gen Bipin Rawat, wife Madhulika’s last rites tomorrow; Defence minister to brief parliament shortly
According to reports, the army chopper crashed shortly after taking off from the Air Force facility in Sulur at 11:45 am. It was on its way to Wellington in the Nilgiri Hills, where General Rawat was scheduled to speak at the Defence Services Staff College.
The Mi-17 V5 helicopter was on its way down and would have landed in 10 minutes if it hadn't crashed. The Air Force has now launched an investigation into what happened.
Meanwhile, the last rites of CDS Bipin Rawat and his wife Madhulika Rawat will be performed on Friday, December 10. The couple will be cremated in Delhi Cantonment tomorrow.
Their mortal remains are likely to arrive in the national capital on Thursday evening in a military plane. The bodies will be taken to his house on Friday, and mourners would be able to pay their respects from 11 a.m. to 2 p.m., followed by a funeral procession from Kamraj Marg to the Brar Square crematorium in Delhi.