In show of strength at Sidhu’s house, Pargat Singh says ‘Why should he apologise to CM?’

Navjot Singh Sindhu is scheduled to take charge at the Congress office in Chandigarh at 11 am on Friday. 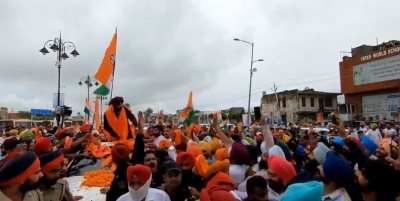 Despite Navjot Singh Sidhu has been announced as Punjab Congress President, the infighting in Punjab Congress is not coming to an end. CM’s demand for public apology remains unmet as MLAs backing Sidhu say that ‘it’s not a public issue.’

Today Sidhu, the newly appointed Punjab Congress head held a meeting with over 62 MLAs at his Amritsar residence.

In what is being called a ‘big show of strength’ three state cabinet ministers, several party district chiefs, and other prominent Congress leaders were among those who joined the Punjab PCC chief in the meeting.

Reportedly, Sidhu had extended an invitation to all 77 Congress lawmakers to pay obeisance at the Golden Temple before formally taking over the role of Punjab Congress head. Of those 62 accepted the invitation, following which the cricketer turned politician visited the Golden Temple along with MLAs supporting him.

When questioned over Punjab CM’s apology demand, Congress MLA Pargat Singh said, “Why should Sidhu apologise, for what”.

"Sidhu has no reason to apologise. It isn't a public matter. Many issues have not been resolved by the Chief Minister. In that scenario, he should apologise to the people as well” said MLA Pargat Singh.

He was responding to a tweet from Punjab Chief Minister Amarinder Singh's adviser, who asked Sidhu to apologise. CM Amarinder Singh's camp sought a public apology for criticising him on various issues as a condition of agreeing to Mr. Sidhu's elevation as state party chief.

"I am confident that party would win the 2022 Assembly elections under Sidhu's leadership as PPCC President. Advisors to the CM are misleading him. Punjab is regressing as a result of this,” said Ghanaur MLA, Madan Lal Jalalpur.

According to Kuljit Singh Nagra, the working President of the state party unit, Navjot Singh Sindhu is scheduled to take charge at the Congress office in Chandigarh at 11 am on Friday.