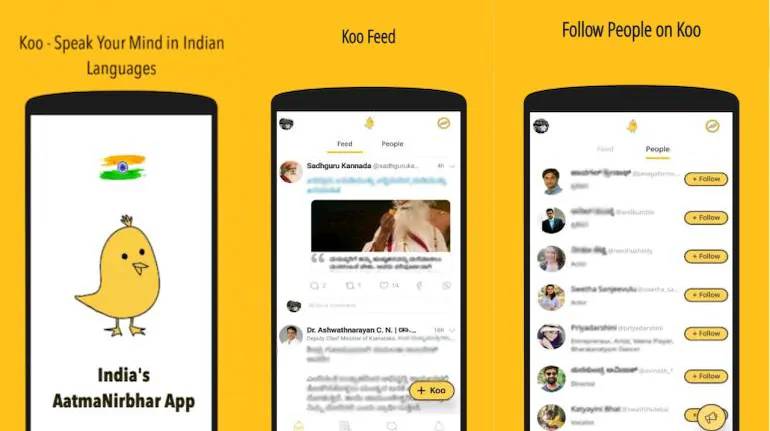 A 10-month-old homegrown app Koo, which is the desi version of microblogging site Twitter has been in news lately after several ministers are switching to this app for conversation. The app is receiving accolades for being the channel that "resonates with the voices of Indians." The app was developed last year as a part of India's AatmaNirbhar Bharat App Innovation Challenge and was launched on MyGov, the Government of India's citizen engagement platform in 2020; received around 6,940 entries from tech entrepreneurs and start-ups across the country.

This immediate interest in the Koo app by several leaders has come after Twitter failed to respond to the Centre’s notice to block around 257 tweets and thousands of accounts that were spreading disharmony and has links with Pakistan and Khalistan sympathisers. However, the firm has not responded to the notice and has only said that it would have a formal dialogue with the  Ministry of Electronics and Information Technology. Twitter India's policy head Mahima Kaul’s resignation last week has also fueled many speculations. Media reports also suggest that the government is mulling suspending Twitter in India to put pressure on the social media giant to respond to its directives. Also, several union ministers and government organisations have switched to 'made in India' Twitter's version called Koo app.

What is Koo App?

Similar to Twitter, Koo is a social media Made-in-India app, which was launched in March 2020. This app has won Prime Minister's Aatma Nirbhar Bharat App Innovation Challenge last year in August. Since its launch, the app has garnered over a million subscribers. PM Narendra Modi had also encouraged Indians to use the Koo App in his Mann Ki Baat speech too. This app is seen as a prospective competitor to Twitter in the backdrop of the government's "disagreement" with Twitter.

Koo has been co-founded by Aprameya Radhakrishna and Mayank Bidawatka. The duo has also built startups like TaxiForSure and redBus in their past entrepreneurial ventures. Koo has been able to raise about Rs 30 crore from a bunch of investors including an entity backed by former Infosys CEO Mohandas Pai. Accel Partners, Kalaari Capital, Blume Ventures and Dream Incubator are its existing investors.

Koo on its download page on the Google Playstore has been defined as an app "built for Indians to share their views in their mother tongue and have meaningful discussions". Its tagline is "connect with Indians in Indian languages". The app is a personal update and views sharing micro-blogging platform. "Discussions are around interesting topics. It empowers people to express their thoughts in Indian languages with a strong-knit local Indian community," it said.

What can be done on Koo app?

Users can do everything that can be done on Twitter. From sharing your opinions, updates and sharing pictures. Celebrities can be followed on this platform as well. You can view your feed in Indian languages and the app will show what is trending.

The Koo app can be downloaded from Google play store and the iOS app store and can also be accessed from the web app too. All the users need is a valid phone number on which Koo sends an OTP for first-time registration.

The Koo App lets users write opinions on anything using text, audio, or video. Text characters can be of 400 and video of 1 minute.

Who all have joined Koo App?

Connect with me on this Indian micro-blogging platform for real-time, exciting and exclusive updates.

Let us exchange our thoughts and ideas on Koo.