The Indian government seems to be going all out to make sure he is repatriated to India to stand trial, Antigua PM said. 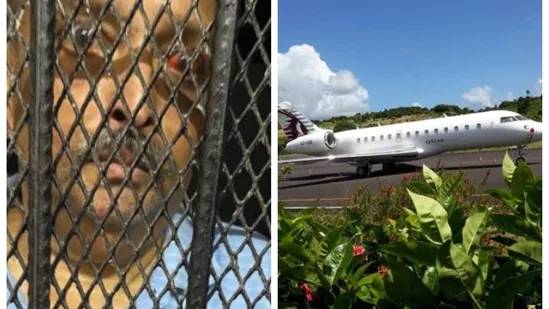 A private jet from India has been sent to the Douglas-Charles Airport in Dominica as Indian fugitive merchant Mehul Choksi remains in the custody of Dominica Police. The news has been confirmed by Antigua Prime Minister Gaston Browne.

The picture of the jet was posted on Antigua Newsroom.

PM Browne said to a TV channel: "My understanding is that the Indian government has sent certain documents from courts in India to confirm that he is indeed a fugitive and my understanding is that the documents will be utilised in the court case as you know the judge in Dominica has put a stay on deportation till Wednesday. So Indian government seems to be going all out to make sure he is repatriated to India to stand trial.”

"We respect the jurisdiction of the court over this matter. My request on behalf of the state, for Dominica to consider deporting Choksi directly to India, as a form of state cooperation to apprehend a fugitive, is perfectly acceptable," he added.

A Bombardier Global 5000 jet of Qatar Executive landed at Dominica’s Douglas Charles airport on Saturday and the flight route shows that it took off from New Delhi on May 28 and reached Dominica via Madrid.

In the last three years, on Saturday, the first pictures of Mehul Choksi accused of multi-crore loan fraud PNB scam were released where he was seen behind the bars with swollen eyes and bruises on his arms. These were the first public photos of Choksi since he has been in Antigua living as a legal citizen after he fled India before the scam surfaced.

The Dominica police arrested Choksi on Wednesday after he was reported to have gone missing on Sunday evening. Since then, he has been in the custody of the Dominica Police.

Earlier, the Antigua police have said that it won’t accept Choksi back in his country as he is wanted in India and he wants him to be repatriated straight to India. However, the Dominica court has put Choksi’s deportation on hold.

The case will be heard again on June 2.

Antiguan PM's has also hinted that the Indian government may present some documents during the hearing.

India does not have a repatriation agreement with Dominica and hence whether he will be deported to India will depend on the government's decision.

Earlier, Dominia's acting police chief Lincoln Corbette has stated that Choksi will be deported to Antigua and not to India.

A habeas corpus petition has been filed in the Eastern Caribbean Supreme Court on Friday by Choksi's legal team in Dominica, comprising Julian Prevost, Wayne Norde, Cara Shillingford-Marsh, and Wayne Marsh, mentioning that he should be given access to his lawyers, which was granted by the court.

It is still not clear how Choksi landed in Dominica, which is 188 km from Antigua. He was the last seen in Antigua in his car.

Choksi’s lawyers have claimed that he was abducted and was beaten, and termed all his missing episodes as ‘fishy’.

Also Read: Antigua PM just made a big statement on Mehul Choksi’s extradition, find out what he said