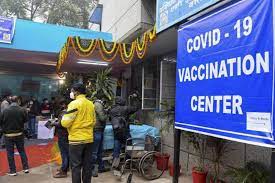 After constant criticism by the Supreme Court regarding the shortage of vaccines and the pace of vaccination drive, the Central Government on Monday announced that the entire population of India is expected to be vaccinated against Covid19 by the end of 2021. The Centre has told SC that it is confident of vaccinating all above 18 by the end of this year.

In a suo moto hearing on the government's strategy of fighting the Coronavirus pandemic, the center has explained its plan of vaccinating all eligible citizens. Besides, the Centre claimed that the domestic production of vaccines will be enough to tackle the high demand for vaccine doses.

In the hearing Solicitor General, Tushar Mehta said that the production from domestic vaccine producers -Serum Institute of India, Bharat Biotech and Reddy’s Lab will be enough to vaccinate all people above 18 years of age.

Highlighting the ongoing crisis of vaccine shortage, the SC said that the Central government should take the charge of sourcing vaccines for the entire country. The order of the topmost court came after several states were floating global tenders to produce vaccine doses after facing severe scarcity.

Earlier, Niti Aayog member VK Paul had defended the Centre’s vaccination policy. He said, “Vaccines are in limited supply globally, and companies have their own priorities, game-plans and compulsions in allocating finite stocks. They also give preference to countries of their origin just as our own vaccine makers have done unhesitatingly for us.”

Also, he busted the rumor that the Centre has not approved vaccines being administered globally and said, “No application of any foreign manufacturer for approval is pending with the drugs controller.”