The image of 30 Army personnel holding the Indian national flag was released on the internet three days after the release of a reported video of PLA troops near the Galwan valley by China's state media. 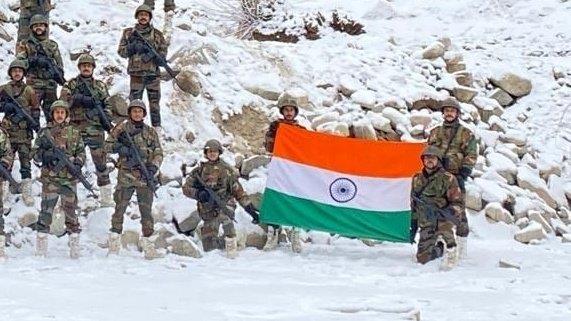 Indian tricolour was hoisted in Galwan Valley on the occasion of New Year. A picture of this has surfaced on the internet, although the army has not yet confirmed this picture. In the surfaced pictures, 30 army personnel are seen holding the tricolor.
These pictures were released after three days after the release of a reported video of PLA troops near the Galwan valley by China's state media. In the video, shared by the Chinese media, Chinese troops were hoisting the Chinese flag and singing the national anthem in their area in Galwan. These pictures of Indian soldiers are being circulated as a response to China's propaganda.
Also Read: 30 injured after 5.5-magnitude quake hits China's Yunnan
These photographs were shared by Union Law and Justice Minister Kiren Rijiju on Twitter. He posted these pictures with the caption, “Brave Indian Army soldiers in Galwan Valley on the occasion of #NewYear2022”.
Reportedly, on January 1, Indian and Chinese forces shared sweets and greetings at ten border sites along the Line of Actual Control (LAC), including in eastern Ladakh and North Sikkim, perceived as a goodwill gesture in the middle of the lingering controversy in eastern Ladakh.