The Turkish airline flight was en route to Indonesia's capital Jakarta, however, it was compelled to divert to another airport for an early landing after the passenger got into a confrontation which later turned into physical with the cabin crew Author : Ujjwal Samrat 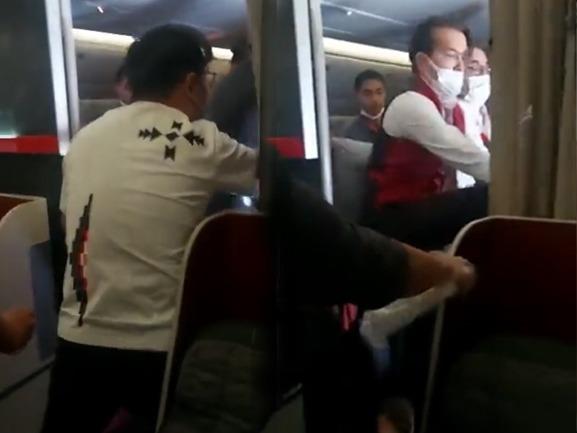 In a bizarre incident, a drunk passenger bit a Turkish airlines stewardess and attacked the cabin crew in mid-air. The Turkish airline flight was en route to Indonesia's capital Jakarta, however, it was compelled to divert to another airport for an early landing after the passenger got into a confrontation which later turned into physical with the cabin crew. The passenger who was later restrained is reportedly a pilot himself of another airline. As per Turkish media reports, the passenger was intoxicated and also bit a steward's finger.

As per the Daily Star report, the passenger's name who caused the ruckus is Muhammad John Jaiz Boudewijn. He is a pilot for Indonesian airline Batik Air, which asserted that his unruly behaviour in no way represents the company's principles. Furthermore, reports suggest that the shocking incident took place as the flight attendants told the passenger to calm down since they believe he was intoxicated while on board the Boeing 777. However, he was alleged to have become even angrier and later bit a crew member on the finger.

The entire incident took place in mid-air and fellow passengers in the meantime recorded the ruckus created by the passenger. Now, the Turkish Airline Indonesia video has been going viral with people in shock by the bizarre incident. In fact, the Turkish Airline flight Indonesia viral video has also started getting traction from all around the world with netizens wondering what actions were taken against the drunk passenger.

On the Turkish airline flight Indonesia viral video, it can be seen the passenger screaming in the flight. While the cabin crew can be seen asking him to sit down on his place, he suddenly started pushing them. As a result, a few stewardesses also came in the middle in order to calm the situation down. However, the other passengers were seen panicking and recording the entire incident.

Reportedly, the aircraft, which was scheduled to arrive in Jakarta, on Tuesday, October 11, at 5 p.m. (local time) was diverted over Kuala Lumpur, Malaysia, and later landed at Kualanamu International Airport in Medan. The plane was able to take off once more and reach its destination at approximately 8 pm (local time) after the passenger who is thought to have started the conflict was restrained and led off the aircraft. Notably, many reports suggest that the passenger was also injured during the ruckus and therefore he was deboarded and was later taken to the medical facility.

Coming to what action is being taken in the incident, KabarPenumpang reported that the Deli Serdang Police, which is active in the Medan region, is now looking into the event.