Virat Kohli is one of the best batsmen of the present times. He was called a run machine because of his habit of scoring runs in consecutive matches. 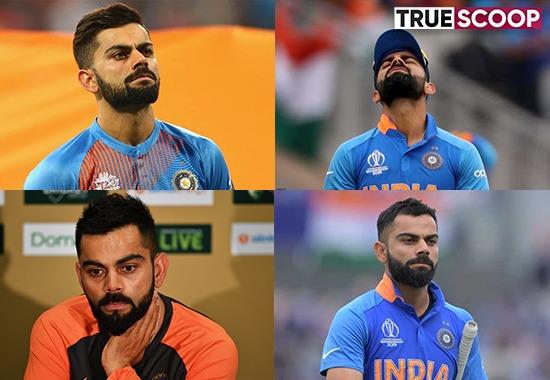 Virat Kohli is one of the best batsmen of the present times. He was called a run machine because of his habit of scoring runs in consecutive matches.
There is no equal to Kohli in chasing runs, but it seems that this machine has been rusted for some time now.
Kohli has not been able to score a fifty in the current season of IPL even after nine matches. On Tuesday (April 26) against Rajasthan Royals, he also changed the batting order, but could not change his luck. He returned to the pavilion after scoring nine runs off the Prasidh Krishna.
There comes a time in the career of every great player in every sport when he gets out of form. From Sachin Tendulkar and Ricky Ponting in cricket, Cristiano Ronaldo and Lionel Messi in football, Roger Federer and Rafael Nadal in tennis to Saina Nehwal and PV Sindhu in badminton. Even Kohli could not escape it.
The last century in professional cricket with Virat's bat came on 23 November 2019. Then he scored a century against Bangladesh in the Day-Night Test at the Eden Gardens in Kolkata.
There have been more than 100 matches since then, but Virat hasn't got a chance to pick up the bat and accept the audience's greetings. Virat had scored 973 runs in IPL 2016. Since then, he has been able to score more than 500 runs only once in a season of IPL.
A look at Virat Kohli's performance in IPL since 2016:
2016: Virat became the first batsman to score 4 centuries in an IPL season. A record that still stands. His highest score in the season was 113 runs.
He scored 973 runs in 16 matches at an average of 81.08 and a strike rate of 152.03. Virat was not out four times. Kohli had hit 38 sixes in the season. His team RCB reached the final but had to face defeat against Sunrisers Hyderabad.
2017: Kohli missed the first four matches of the season due to a shoulder injury. He was injured in the Test match against Australia in Ranchi. Virat played 10 matches. This time there was a decline in his form as compared to last season.
Virat had scored 308 runs at an average of 30.80. His strike rate was 122.22. Only four half-centuries came off Kohli's bat. His team could not reach the playoffs.
Also Read: Happy B'Day Sachin Tendulkar: 'God of Cricket' turns 49, Debuts at 16 and Retires at 40; 'Unique' Records
2018: This time IPL went better for Kohli than last season. He scored 530 runs in 14 matches at an average of 48.18. Virat was not out thrice.
His highest score was an unbeaten 92. Kohli once again hit four half-centuries in the season. Despite their better performance, the team did not reach the finals.
2019: Three years later, Kohli's bat scored a century. This was the second season after 2016 when Kohli scored a century. His highest score was 100 runs.
In 14 matches, Virat scored 464 runs at an average of 33.14. Two half-centuries came off his bat. Despite Kohli playing well, his team did not reach the playoffs.
2020: This season, Kohli performed the same as in 2018. Scored 466 runs in 15 matches. His highest score was 90 not out and an average of 42.36.
Virat scored three half-centuries in the season. Was not out four times. RCB's team was successful in reaching the playoffs this time, but they had to face defeat by six wickets in the Eliminator match.
2021: Virat scored 405 runs in 15 matches this season. His highest score was 72 not out. Kohli's average declined. His average this season was only 28.92.
Three half-centuries came off his bat. For the second time in a row, RCB's team reached the playoffs but was eliminated in the eliminator. He was defeated by Kolkata Knight Riders.
2022: Virat's performance in the current season has been disappointing. In nine matches, Kohli has scored 128 runs at an average of 16. His highest score is 48 runs. Virat's strike rate is also below 120.
He has scored runs at a strike rate of 119.62. RCB are yet to play five matches. The team expects big innings from Virat in the remaining matches. Kohli himself would also like to end this bad phase.