Modi has been accused of discriminating against minority Muslims in Hindu-majority India by the Islamist groups and violence intensified rapidly during his visit. 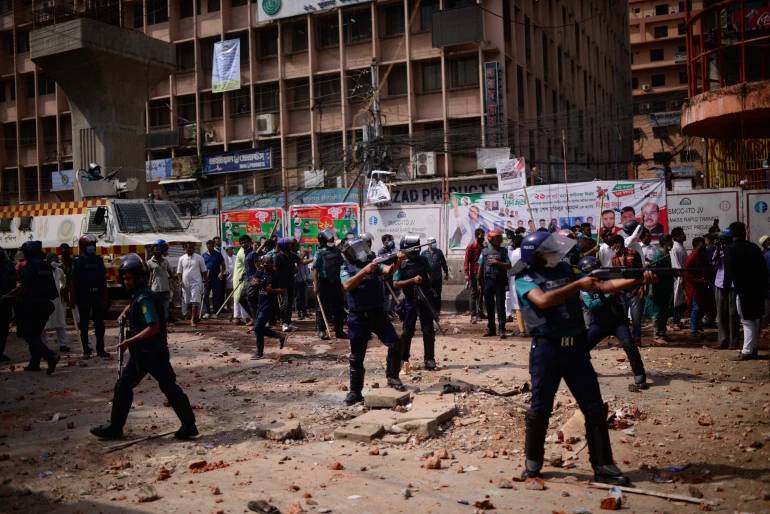 Hundreds of members from Islamist group attacked Hindu temples and train in eastern Bangladesh on Sunday, police and a local journalist said, as violence spread across the country in the wake of a visit by Indian Prime Minister Narendra Modi. About 10 protesters died in dispute with police during the demonstrations and violence intensified after Modi left as anger grew over deaths.

Modi was accused of discriminating against minority Muslims in Hindu-majority India by the Islamist organisations and violence intensified rapidly during his visit.

A large number of people were injured in Dhaka on Friday after police fired tear gas and rubber bullets at radicals. While thousands of Islamist activists paraded down the streets of Chittagong and Dhaka on Saturday in protest. Protesters associated with the Hefazat-e-Islam group on Sunday stormed a train in the eastern district of Brahmanbaria, causing injuries to 10 people.

"They attacked the train and damaged its engine room and almost all the coaches," one police official told Reuters, declining to be named as he was not authorised to speak to the media.

Javed Rahim, a journalist in the Brahmanbaria town, speaking to Reuters on phone, said, “Brahmanbaria is burning. Various government offices were set on fire indiscriminately. Even the press club was attacked and many injured, including the press club president. We are in extreme fear and feeling helpless.”

He also added that many Hindu temples were also attacked.

On Sunday, the Islamist protesters set ablaze two buses in the western district of Rajshahi, whereas hundreds of demonstrators clashed with police in Narayanganj, pelting them with stones, police said. They used timber and sand-bags to block roads, as police countered with rubber bullets and tear gas, leaving dozens injured in Narayanganj, just outside the capital, Dhaka.

Widespread protests aroused in the neighbouring country after Modi’s visit, taking shape of wider demonstrations against police killings, and the Hefazat-e-Islam declaring strike across the country on Sunday. "Police opened fire on our peaceful supporters," Hefazat-e-Islam’s organising secretary Azizul Haque told a rally in Chittagong on Saturday. "We will not let the blood of our brothers go in vain."