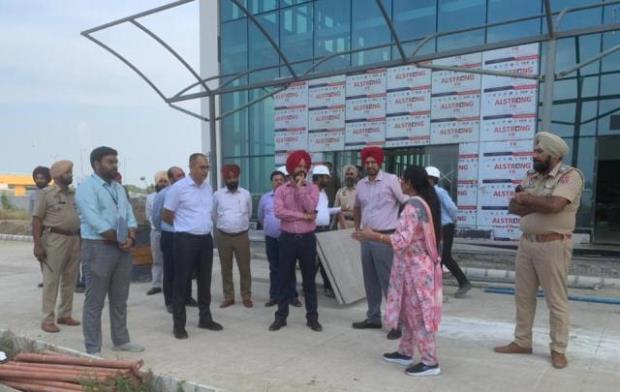 Deputy Commissioner Jaspreet Singh has reviewed the status of ongoing construction work of Terminal Building at Adampur Airport besides approach road towards airport and gave directions to concerned authorities to bring acceleration in the pace of works.

Accompanied by the officers’ concerned taking stock of the status of works, the Deputy Commissioner stated that the new terminal building would be constructed at a cost of Rs. 83.12 crore having ultra-modern infrastructure including VIP lounge, new gates for arrival and departure purpose besides other requisite facilities for the passengers. He said this terminal would be beneficial for the passengers as the construction is set to be completed by the end of September. He also reviewed the parking situated at the backside of terminal having connectivity with the runway.

Inspecting the work of approach road towards airport, the Deputy Commissioner directed the officials to speed up the work so that the work could be accomplished within stipulated timeline. He said that once this road was completed it would provide a major relief to the passengers as they could reach directly to the airport instead of taking route encompassing villages. The officials of Airport Authority also raked up the issue of temporary encroachments on MES road. Deputy Commissioner also held discussions with the AAI official for restarting flights from Adampur.

The Deputy Commissioner also directed the concerned officers to remove the said temporary encroachments and on his directives these encroachments were removed in the afternoon to facilitate the flow of traffic towards airport.