An LPU student suicide note has surfaced and the actual reason for the first-year student's death has been revealed. 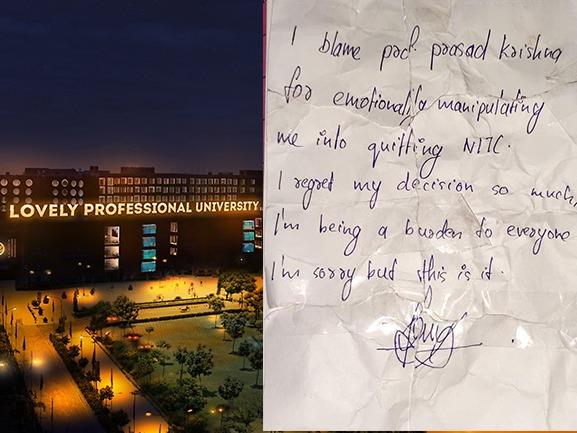 A 21-year-old bachelor of design student from Kerala died by suicide in hostel at Lovely Professional University (LPU) in Punjab’s Phagwara on Tuesday afternoon. As soon as the incident came to the limelight, the Police reached the college and took cognizance of it. DSP Phagwara stated that prima facie the student was having some personal issues. Furthermore, it was also revealed that the student had left a suicide note. The Lovely Professional University also confirmed the suicide case and stated that the college administration is providing full support to the authorities for further investigation. Now, an LPU student suicide note has surfaced and the actual reason for the first-year student's death has been revealed.

A first-year student of B. Design at LPU has committed suicide on Tuesday afternoon.
DSP Phagwara stated that prima facie the student was having some personal issues, as has been suggested by the suicide note left by the deceased. #LPU #University #Suicide #Phagwara #Kapurthala pic.twitter.com/KW957uXl63

LPU's Kerala-based student in his suicide blamed a professor at NIT Calicut who manipulated him to quit the college. "I blame professor Prasad Krishna for emotionally manipulating me into quitting NIT Calicut (Kerala). I regret my decision so much, I'm being a burden to everyone. I'm sorry but this is it (SIC)", the LPU student wrote in his suicide note. Reportedly, the deceased student had joined LPU only 2 weeks ago. Earlier, he was studying in NIT Calicut for 2 years where Prof. Prashad Krishna allegedly forced him to drop out of college.

LPU mourns the death of a Kerala-based student

Lovely Professional University took to its social media handles and shared its official statement. In its official statement, LPU stated that it mourns the death of the student and is cooperating in the Police investigation. "LPU fraternity is saddened by the unfortunate incident. The initial investigation of the Police, and the contents of the suicide note point towards personal issues of the deceased. The university is providing full support to the authorities for further investigation. The university mourns the loss of the student and expresses its condolences to the bereaved family."