The Gunjan Saxena actress Janhvi Kapoor enjoys a huge fan following. She keeps on treating her fans with her stunning pictures and videos. Recently the actress returned from her vacation and is now stuck at home due to lockdown. In this period of no work, the actress has found a new way to keep herself busy. Janhvi is busy watching movies, suggests her recent Instagram story. In the story, she shared the scenes from the movie ‘Life in a Metro’ starring late Irrfan Khan and Konkona Sen Sharma.

Taking to her Instagram stories the actress shared two scenes from the movie and called him an ‘iconic’ star. The late actor Irrfan Khan passed away last year and was last seen in the movie ‘Angrezi Medium’. Irrfan dies at the age of 53 due to kidney ailments. Earlier, the actor was diagnosed with Neuroendocrine Tumour in 2018. 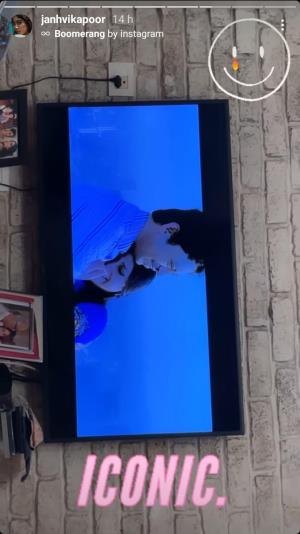 Talking about Janhvi’s work front, she was last seen in ‘Roohi’ a horror-comedy movie starring Rajkumar Rao and Varun Sharma. The film received a very positive response from the audience. She will next be seen in Good Luck Jerry. This movie will be directed by Siddharth Sengupta with the production of Aanand L Rai. Good Luck Jerry has completed its shoot. Her film Dostana 2 is also on the loop and making headlines after the removal of Kartik Aaryan from the lead role. Other than this she also has Karan Johar’s Takht in her pocket.

Also read: ‘The Little Women’ actor might be the co host for Met Gala 2021

Like every other citizen of the country Janhvi is also eager to get vaccinated for covid 19 and has recently been sharing covid resources details on her social media account.