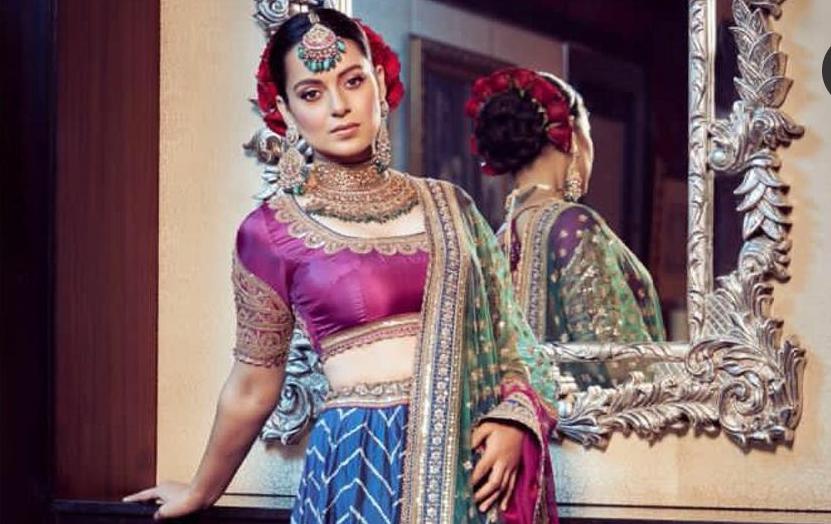 Four National award-winning Bollywood actress Kangana Ranaut’s Twitter account was ‘permanently suspended’ on Tuesday morning. The actress had made some controversial and strong comments against the recent Bengal polls. The controversial tweet reads, “ this is horrible…we need super gundai to kill gundai..she is like an unleashed monster, to tame her Modi Ji, please show your Virat roop from early 2000’s…##PresidentRuleInBengal”.

As a response to this action, Kangana has said, “ Twitter has only proved my point they are Americans and by birth, a white person feels entitled to enslave a brown person, they want to tell you what to think, speak or do. Fortunately, I have many platforms I can use to raise my voice including my own art in the form of cinema but my heart goes out to the people of this nation who have been tortured, enslaved, and censored for thousand of years and still there is no end to the suffering”. Sharing ANI tweets of this statement Kangana informed that a number of FIR’s have been filed against her since then. 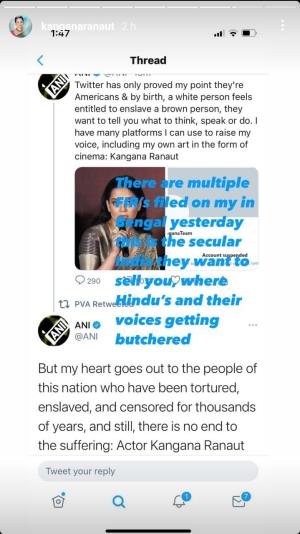 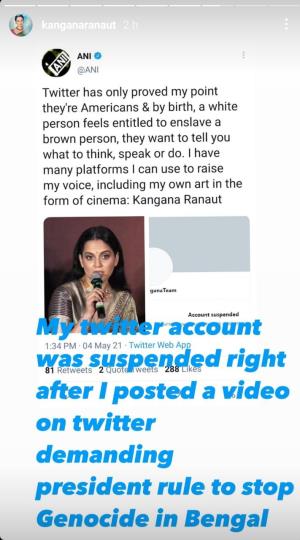 Taking to her Instagram story the actress wrote, “multiple FIR’s have been filed on my in Bengal yesterday this is the secular India they want to sell you, where Hindu’s and their voices getting butchered”. Earlier also the actress was criticized for her derogatory remarks about farmer’s protest that she shared on her social media account. Kangana Ranaut’s tweets are always a topic of buzz. She has always been very vocal and blunt about her thoughts on social media. Last year, a writ petition was filed in the Bombay High Court that demanded suspension of her Twitter account for spreading continuous hatred in the country.