Supporting Queen Elizabeth II, Kangana Ranaut tweeted that the only female monarch left in the world may not be an ideal mother-in-law, wife or sister, but is a great queen and let her retire like a Queen. 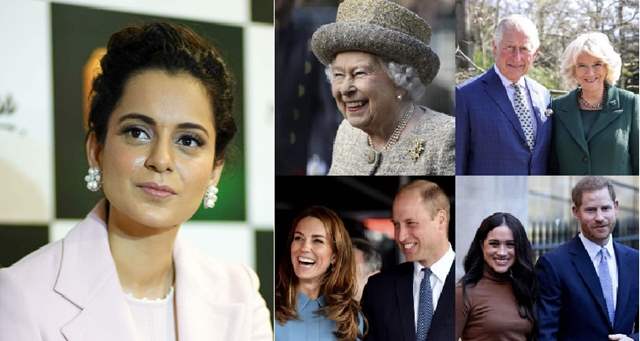 Here comes Kangana Ranaut's hot take on Meghan Markle and Prince Harry's controversial interview with Oprah Winfrey. The actor came in support of Britain’s Queen Elizabeth II. Although she hasn’t seen the interview, “as sass, bahu, sajish type stuff never excites me,” and went on to defend the Queen and her legacy.

“I never saw the interview as sass, bahu, sajish type stuff never excites me. All I want to say is one woman the only ruling Monarch left on this globe may not be an ideal MIL/wife/sister, but she is a great Queen,” she wrote in a tweet.

"For few past days, people gossiped, judged, online lynched a family based on one-sided story at the cost of a family, I never saw the interview. All I want to say is one woman the only ruling Monarch left on this globe," Kangana wrote, with a collage picture of the Queen, Prince Charles and the Duchess of Cornwall, Camilla; Prince William and Duchess of Cambridge, Kate Middleton; and Harry and Meghan.


Praising the Queen for protecting the crown and carrying her father’s dream, Kangana said the Queen saved the crown better than any son could have done. “She saved the crown. Let her retire like a Queen," she added. Of course, there is no retiring for the Queen. She will be the queen of Britain until her death when her son Prince Charles accedes to the throne.”

Also Read: Isabelle Kaif on what advice sister Katrina Kaif gave her ahead of her Bollywood debut

Meghan Markle and Prince Harry revealed shocking things in the interview about their life as senior members of the royal family that gave shockwaves across the world. Meghan discussed the impact racist vitriol from the UK press had had on her mental health and that she was suicidal in 2018 when she was pregnant with her first child, son Archie. Palace staff did not provide her with the medical help she needed for her mental well being and also did not 'protect' her against rumours and false news being propagated against her in the UK media. The couple also mentioned how the family, too, had made racist remarks about the skin colour of their then-unborn baby. Meghan is the first person of colour to join the British royal family.

Amid the racism allegations that prevails in the Royal family, Prince William stated that Britain's royal family is "very much not racist". William, the Duke of Cambridge, also revealed that he had not spoken to his younger brother Harry since the interview was the first broadcast over the weekend but plans to do so.

Sources indicate that Queen Elizabeth II was "saddened" to discover the level of challenges her grandson and his wife had to go through for all these years.