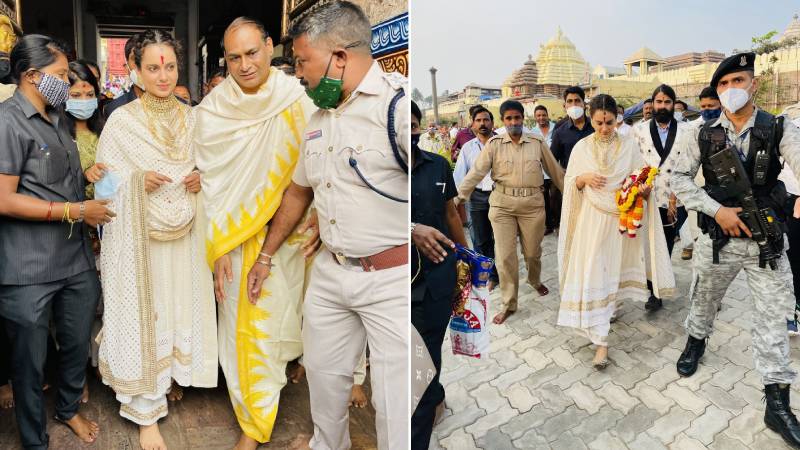 Bollywood actress Kangana Ranaut often remains in controversy mainly due to her political standings and her point of view on the burning issues of India and the world. However, there is no denying that the people of India love her acting. The actress has been the winner of the national award twice in her Bollywood career. Now, Kangana is busy in making her upcoming action-thriller movie Dhaakad. Kangana keeps on sharing behind the scene pictures and videos of her upcoming movie Dhaakad.

When Kangana visited Mumbai with her Y plus security few days back, she visited Sidhivinayak temple with her siblings Rangoli Chandel and others. Her pictures of Sidhivinayak's visit also went viral on social media. Now, Kangana has visited  Puri Jagannath Temple in Odisha. Kangana took a break from her hectic schedule to seek the blessings at the temple. The actress also narrated the story and specialty of the temple she visited.

In a series of tweets, Kangana wrote, "Krishna loved not just humans,when he played flute animals reptilians all came hypnotised and drooled over him,he famously made love with his eyes wherever they fell,my analogy is he wanted to leave his heart for those he missed, separated by thousands of years but joined by a"

"Oh I am so excited.... almost shivering with excitement... 6am Darshan but how will I spend this night ... this night seems like a yug ... "

Sharing pictures of her visit, Kangana also narrated the speciality of the temple she visited. She wrote, "We always see Krishna with Radha or Rukmani(Laxmi) but in Puri Jagannath Lord Krishna is placed with his siblings, Balrama n Subhadra(Arjun’s wife, Abhimanyu’s mom) Pulsating with the energy of his heart chakra whole place has a healing and soothing sweetness to it,enchanted."

On the work front, Kangana will be seen in 'Thalaivi' which is a biopic on actor-turned-politician Jayalalithaa. She also has 'Tejas' and 'Manikarnika Returns: The Legend of Didda' in the pipeline. Kangana's upcoming movie Dhaakad will be releasing on October 1.