The Kapil Sharma Show will host Kartik Aaryan, Mrunal Thakur and Amruta Subhash from the cast of Dhamaka this weekend. 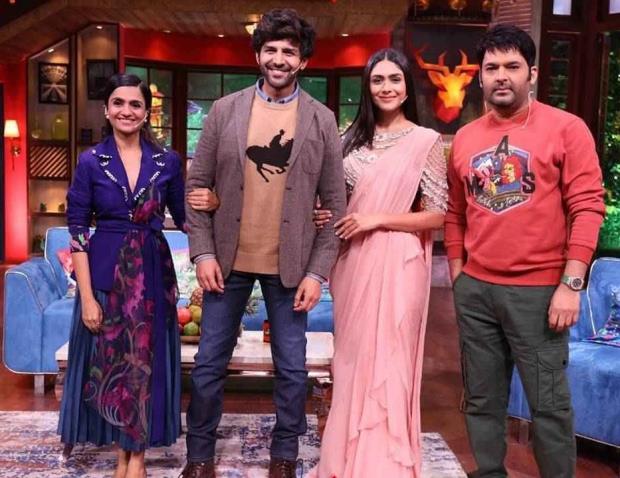 Kapil Sharma’s comedy show on Sony TV will host Kartik Aaryan, Mrunal Thakur and Amruta Subhash this weekend as they promote their film Dhamaka. In a hilarious promo shared by Sony TV, it seems like this will be a laugh riot for the audience.

Kapil Sharma continued and said, “Yeh pehla banda hai jinhone Akshay Kumar ki film chheen li (He is the first one to snatch Akshay Kumar’s film).”
Kartik Aaryan also came up with a savage come back and said, “Main toh un bando ko dhoondh raha hoon jo mere producers ko bol rahe hai ki ₹100-50 kum le lo lekin Kartik ki film hume de do (I am looking for those who are approaching my producers and offering to do my films for less money).” For those of you who’re confused about which film they’re talking about, it’s Bhool Bhulaiyaa that starred Akshay Kumar and Bhool Bhulaiyaa 2 that stars Kartik Aaryan.

In Dhamaka, Kartik Aaryan plays the role of a news reporter named Arjun Pathak. The film has been helmed by Ram Madhvani of Aarya and Neerja fame. Dhamaka premieres on Netflix on November 19.