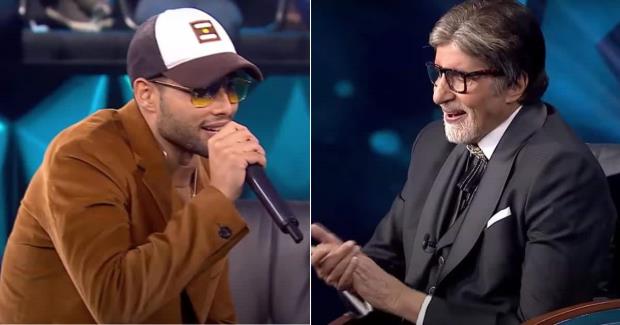 The recently released promo of KBC 13 starts with Siddhant Chaturvedi rapping for the one and only Amitabh Bachchan and calls him ‘sabka baap’ in his rap.

The actor, who played the role of a rapper in his debut film Gully Boy, impresses Big B with his rap. Siddhant Chaturvedi slightly modifies the iconic line ‘Rishtey Mein Toh Hum Tumhare Baap Lagte Hain’ from his film Shahenshah and uses it as ‘Sabke Baap’.

Interestingly, post the release of Gully Boy, Amitabh Bachchan had sent his patent handwritten letter and flowers to Siddhant Chaturvedi as a token of appreciation to him for his debut film.
Siddhant Chaturvedi, who will be seen in ‘Bunty Aur Babli 2’ previously revealed that he overcame hydrophobia while filming the romantic track ‘Luv Ju’ with debutant Sharvari.

Shedding light on the incident, he told said, “Actually no one knows that I’m hydrophobic! So, when I was told that ‘Luv Ju’ will have a sequence where Sharvari and I have to shoot underwater, I got very scared. But, as I have learned from my parents, if you do have a phobia or a fear, you have to address it and win over it.”