The AAP leader is on his two-day Punjab visit on which is a part of the party's "Mission Punjab" programme. 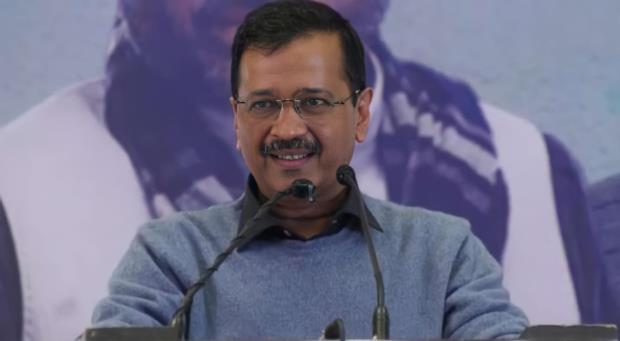 Aam Aadmi Party president Arvind Kejriwal on Tuesday lauded Punjab Congress head Navjot Singh Sidhu for criticising his own party and speaking out for the betterment of the people of Punjab. The Delhi CM also called Sidhu ‘courageous’ for calling out Charanjit Channi over the sand mafia and other major issues in the state.

The AAP leader is on his two-day Punjab visit on which is a part of the party's "Mission Punjab" programme. This is his second day in the state ahead of Punjab elections.

“Sidhu is advocating for people’s issues. But Congress is only pressuring him. Earlier, Captain Amarinder tried to shut him down and now Channi is doing the same," said Kejriwal in a press conference.

After a long feud, PPCC Chairman Sidhu and Chief Minister Channi shared the stage in Ludhiana on Monday. However, Sidhu did not stop from taking a dig at the CM.

Sidhu praised Channi for cutting power rates, but said that despite the CM's announcement that sand rates would be reduced, it was still being sold for Rs 3,400 per trolley, "which needs to be stopped."

“Reta free karan di gall zaroor kitti hai par reta ajj vi 3400 nu hi milda (sand rates are reduced but it is still being sold for Rs 3400). Sand should not be sold for more than a thousand rupees per trolley. Otherwise, Sidhu will not return," he said, adding that "honesty and morals will win in the polls this time... I'm not going to let the Punjab issue snubbed.”

Meanwhile, the AAP’s president on November 22 has called Channi the “fake Kejriwal.”

“These days, a 'nakli Kejriwal' is roaming in Punjab. "Whatever I promise, he announces the next day but fails to follow through. He should be avoided at all costs. Only Asli Kejriwal can deliver on his promises."

The scathing attack on Channi came as Kejriwal accused him of copying his pre-election promises.

"In Punjab, I announced Mohalla Clinics. Fake Kejriwal said the same thing but didn't even make a single facility. I'll be meeting with auto unions; this was scheduled ten days ago, but he went today. Darna accha hai (It's good to be afraid)," he said, sneering at CM Channi.

Kejriwal also criticised CM Channi over the electricity subsidies and said, "Kejriwal is the only person who can make your electricity bill zero. Nobody else has the power to make it happen,” he stated. Mr Channi recently slashed electricity rates for domestic consumers in Punjab by three rupees per unit, promising an uninterrupted power supply at affordable rates.