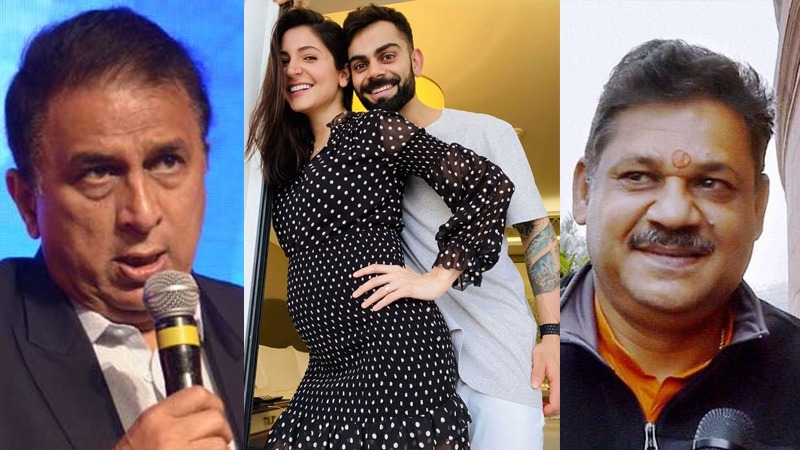 Cricketing legend Sunil Gavaskar found himself an unusual situation after the social media trolled and criticized him brutally. One of the most loved cricketers Sunil Gavaskar was slammed by the social media for his alleged sexist remark during commentary. While the Kings X1 Punjab beat the RCB easily, Kohli was criticized and trolled for his poor performance in fielding as well as in batting. When Kohli came to bat, Gavaskar said: “Inhone lockdown me to bas Anushka ki bowling ki practice ki hain". (Virat Kohli has only trained against Anushka’s bowling during the lockdown).

Many took this statement by Sunil Gavaskar as double meaning and some even called him sexist. Soon, Bollywood actress Anushka Sharma also lashed out at the former cricketer. Anushka shared a post and wrote, "That, Mr. Gavaskar your message is distasteful is a fact but I would love for you to explain why you thought of making such a sweeping statement on a wife accusing her for her husband's game? I am sure over the years you have respected the private lives of every cricketer while commenting on the game. Don't you think you should have an equal amount of respect for me and us?"

"I am sure you can have many other words and sentences in your mind to use to comment on my husband's performance from last night or are your words only relevant if you use my name in the process?" Anushka added. 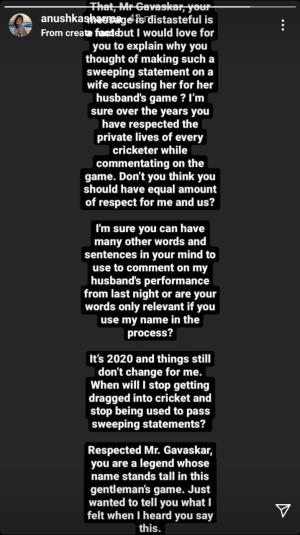 As a response former Indian cricketer, Kirti Azad slammed Anushka Sharma for criticizing the cricketing leged over mere humor. Kirti wrote, "Trolling the legend #SunilGavaskar is not in good taste @AnushkaSharma You're taking this too far. @imVkohli is adored by all. Relax and enjoy. Sunny bhai has never hit anyone below the belt. Don't make it a feminist or personal issue. It has been my honour to have played with him."

However, soon Anushka got the support from a well-renowned columnist.  Shobha De took to twitter and wrote, "A big shout out to @AnushkaSharma! Well said, with dignity and grace! About time something was done about such cheap jibes aimed at wives of cricketers. And other women. Shame!"