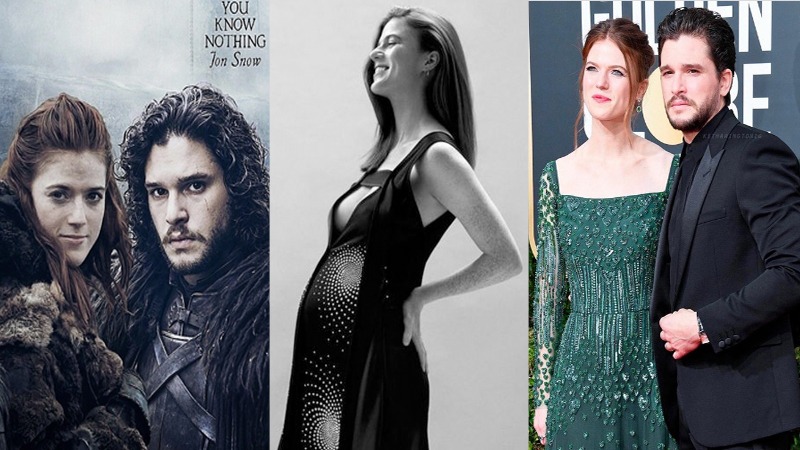 The actress, who played Ygritte on the fantasy series opposite Kit’s Jon Snow, showed off her baby bump in stunning photos for Make Magazine. Speaking to the publication, she explained that the pair of them have moved home to England ahead of having their baby. ‘What a glorious thing to be able to run to the countryside and recoup,’ she said.

‘It’s a great privilege to be surrounded by greenery, birdsong and hedgerows, and our delightful neighbours. It’s so peaceful.’ The couple met on the set of the fantasy series, and played on-screen lovers.

Kit, 33, previously opened up about falling in love with his wife on the set of the show, when the pair of them visited Iceland to shoot. He said: ‘Because the country is beautiful, because the Northern Lights are magical, and because it was there that I fell in love.

‘If you’re already attracted to someone, and then they play your love interest in the show, it’s becomes very easy to fall in love.’ They got engaged in 2017 before tying the knot in 2018 in a fairytale wedding, with the likes of Sophie Turner, Emilia Clarke, and Peter Dinklage attending the big day in Scotland.

Have a great Thanksgiving everyone! ❤️

Ahead of the sweet announcement, the actor opened up about his own childhood, revealing he was raised ‘gender-fluid’.

Leslie revealed the news and showed off her growing belly in a cover story and photoshoot for the summer 2020 issue of UK's Make Magazine, which was published on Saturday.

Harington and Leslie met on the set of "Game of Thrones," playing Jon Snow and Ygritte on the hit HBO show that lasted for eight seasons between 2011 and 2019.

Their characters first encountered each other during season two and went on to fall in love. Their romance ended when Ygritte died in Jon's arms during season four, episode eight titled "The Watchers on the Wall."