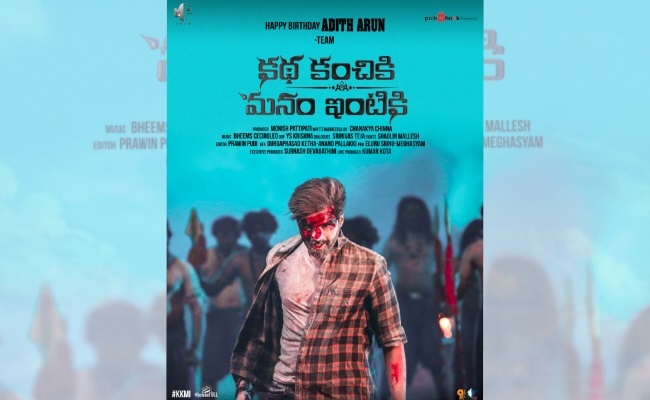 A short while back, the motion poster for birthday boy Adith Arun's forthcoming film, Katha Kanchiki Manam Intiki, was released. Curiosity is piqued by the poster's intriguing aesthetics. There are a few Aghoras in the backdrop, giving it a creepy feel. Adith is dressed in an unusual but eye-catching ensemble. He has the appearance of an urbane Aghora, with a blood splattered on his face.

"Katha Kanchiki Manam Intiki," billed as a horror-comedy, starring Adith Arun and Pujita Ponnada in the key roles. While there have been other horror films to date, this one stands out. The post-production process is currently in progress. On the occasion of Ugadi, all the details regarding the film will be revealed. "Katha Kanchiki Manam Intiki" has enlisted Prawin Pudi to handle the film's editing, while YS Krishna has been hired as the cinematographer.

Katha Kanchiki Manam Intiki has a unique plot, according to the poster. The same provides a brief look at the protagonist's personality.

The film stars Adith Arun and Pujitha Ponnada and is directed by Chanakya Chinna. The film is being funded by Monish Pattipati.

Srinivas Teja wrote the lyrics and dialogues for the film, which is being scored by Bheems Ceciroleo. Arun's fans and netizens are sending him birthday greetings.