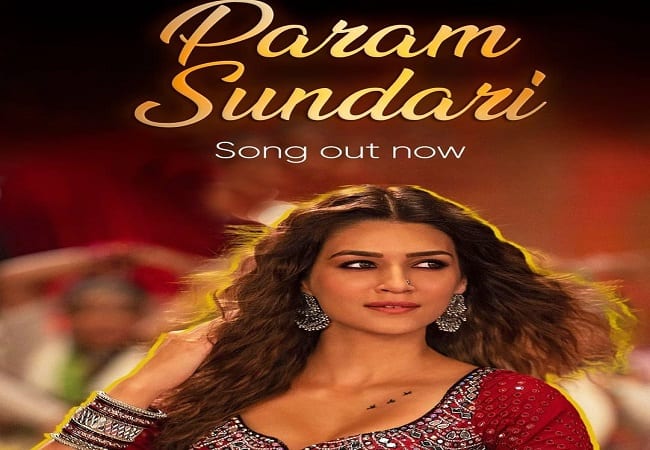 Earlier, the trailer of actors Kriti Sanon and Pankaj Tripathi’s hotly-anticipated film ‘Mimi’ was released, and the audience has given a big thumbs-up to it. Today, Param Sundari song has been released from the movie Mimi by the makers.

The peppy dance track features Kriti Sanon in her breathtaking dance moves. The actress has danced impeccably to the song created by Shreya Ghoshal and AR Rahman. The lyrics of Param Sundari have been penned by Amitabh Bhattacharya.

Talking about the track, Rahman said, “Param Sundari is a reflection of the lead character Mimi’s dreams. We wanted something catchy and desi which could capture the simplicity of life in small towns and the love that ties all people together. I think we found the right balance with this track. Enjoy Param Sundari!"

Released just three hours ago, the song is already trending on YouTube. Kriti can be seen in a deep red traditional outfit with mirror work on it. She accessorised her look with heavy silver jewellery. She can be seen gliding on the floor and giving perfect expressions.

Kriti Sanon’s movie trailer has been all over the internet. Now, the release of this dance number has added an oomph factor to it. The fans are eagerly waiting for the release of the movie. Mimi will be streaming 30th July onwards on Jio Cinema and Netflix.

Mimi is a remake of the 2011 National Award-winning Marathi film Mala Aai Vhhaychy!, it stars Kriti Sanon as a surrogate mother alongside Pankaj Tripathi, Sai Tamhankar, Manoj Pahwa and Supriya Pathak, as well as Evelyn Edwards and Aidan Whytock.

Talking about her character, Kriti said, "I am very excited. It's based on the subject of surrogacy but actually it's the story of this young girl who wants to be an actor. She's a dancer in Mandawa and she ends up being a surrogate for a couple. Then, the things that follow change her life and also change her as a person.”

For Mimi, Kriti Sanon put on 15 kg of weight and she did so by gorging on fried food, chocolates and more.