Prime Minister Modi is all set to inaugurate a Robot Café in Science City, Ahmedabad. 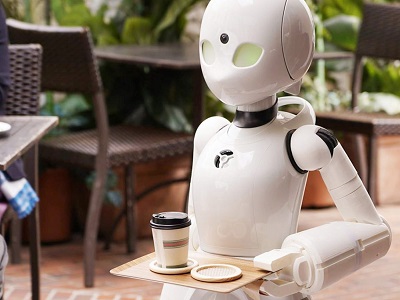 It would be not less than any surprise if a robot comes to serve at a café. The café will have robot chefs preparing different types of dishes and robot waiters will take it to the customer's table.

Prime Minister Narendra Modi will virtually inaugurate this unique robot café today. The robotic gallery will see music bands playing, dancing, and serving food to customers. At the same time, the Butter Flood Garden and Bamboo Tunnel at Nature Park will also be the center of attraction for children.

The robotic gallery, constructed by Vadodara-based Cube Construction Engineers Limited, will see the firm maintain the gallery for next five years. The construction, operations and maintenance will cost around Rs 127 crore.

The three-storey unit with a self-driving car track on its perimeter has a ground-floor cafeteria manned by robot servers and the food is also prepared by robots.

Also on the ground floor are interactive exhibits, where one can sit down for a picture which will then be 3-D printed or sketched, both being paid services. The ground floor courtyard sees some of the more pop-culture robots of Transformer, Wall-E and the humanoid robot Asimo. The Aquatic Gallery at Science City has been developed at a cost of Rs. 164 crore. It is said to be the largest aquarium in the world. The aquarium will have sharks and a variety of fish.

In addition, a nature park has been set up in consultation with the forest department with a view to educate visitors about flora. Spread over 20 acres, the park has a bamboo tunnel, oxygen park, and space to play chess and do yoga. Separate jogging tracks have also been laid here. In addition, PM Narendra Modi will inaugurate the redevelopment of a 5-star hotel and Gandhinagar railway station on Friday afternoon. On the other hand, everyone will be looking at the new attractions of Science City, Ahmedabad. It includes a robot gallery, an aquatic gallery, and a nature park.