Days after sharing his concerns with Congress leader Rahul Gandhi, Punjab state President Navjot Sidhu on Sunday made public a letter he has written to party chief Sonia Gandhi, saying this is Punjab's last chance for resurrection and redemption.

"Request you to kindly give me a personal audience to present to you the Punjab Model with a 13-Point Agenda to be part of the Congress Manifesto for the 2022 Assembly elections, which is separate from this by means of its long-term vision to be implemented over a longer period of time, have crafted it through years of consultations with academics, civil society, party workers and feedback from the People of Punjab," Sidhu wrote.

"I express with a lot of pain in my heart that this is Punjab's last chance for resurrection and redemption. The issues at Punjab's heart as understood very well by you, and signified by the 18-Point agenda given to the last Chief Minister are equally relevant today. I stood for each point in that agenda through the responsibility vested in me of the organization, keeping the executive under check, to be guardian of Punjab's rights."

Saying that Punjab is submerged under lakhs of crores of debt due to gross financial mismanagement over the last 25 years and diversion of public resources making a few powerful people rich and having left the state debt-distressed, he said it has been supplemented by seven years of BJP rule discriminating against Punjab while paying its financial dues such as GST payments, rural development fund payments, post-matric scholarship for Scheduled Castes payments, etc. 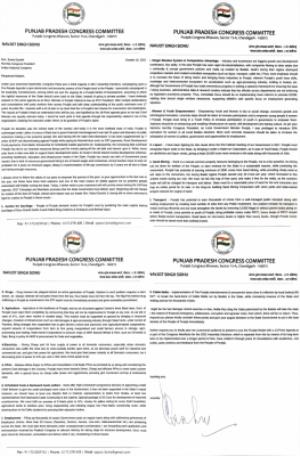 Sidhu said, "Subsequently, the increasing debt overhead of Punjab has led to our financial resources being used for merely paying-off the old debt and interest upon it.

"While, every year have to take new debt to support basic development works, to invest in 60:40 shared Central development schemes, providing healthcare, education and infrastructure needs of the State.

"Punjab has nearly one lakh of government posts vacant, due to lack of resources, government hirings are at lowest wages and contractual, school teachers have to work on probation for four years on minimum wages, delays in implementation of 6th Pay Commission by five years are all due to state not having enough resources."

"Today, I further write to your esteemed self with priority areas among the 18-point agenda, 2017 campaign and manifesto promises that the state government must deliver upon. Beginning with the issues for justice of the soul of Punjab, whose torch-bearer was our leader Rahul Gandhi Ji, having left no stone unturned in fight for justice to Punjab," he added.

Sidhu resigned as Punjab Pradesh Congress Committee president last month. However, his resignation was not accepted by the party high command.