The deceased was accused of desecration of the Sikh holy book, Guru Granth Sahib. The video shows, a man with a severed hand and leg lying on the floor and Nihangs interrogating him. 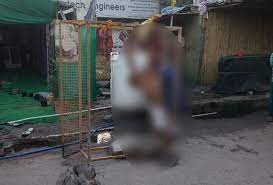 In a heinous crime at Delhi-Singhu border, the main stage of protesting farmers, a Dalit man was beaten and tortured to death by Nihangs, a 'warrior' Sikh group. A video featuring Nihangs and the man suffering from serious injuries has been discovered. The deceased was accused of desecration of the Sikh holy book, Guru Granth Sahib.

The video has been circulating on the internet after the dead body was found hanging with a police barricade at the protesting site on Friday around 5 am. The body was found in a semi-naked condition with its hand and leg chopped off.

The video shows, a man with a severed hand and leg lying on the floor and Nihangs interrogating him about the reason for Shri Guru Granth sahib’s desecration.

The deceased has been identified as 35-year-old Lakhbir Singh, a resident of Punjab's Tarn Taran.

In the video, Nihang could be seen asking “Why did you commit beadbi? What is your name? Who sent you here?”

“Those who commit beadbi will meet the same fate. No one will make it out alive,” the Nihang adds. He further says that “Nihang Singhs who have caught him committing desecration of Maharaj’s Swaroop and thrashed and chopped of his hand are standing right here”.

Meanwhile, the victim was seen begging Nihangs to cut off his neck. Nihang, on the other hand, said that they would not chop off his head. “This way you’ll get ‘mukti’. You should die in agony,” he adds.

Meanwhile, the Samyukt Kisan Morcha has condemned the murder of a person at the Singhu Border protest site by Nihang Sikhs. The farm union has clarified that they have no affiliation with Nihangs or the killing.

SKM demands perpetrators be prosecuted in accordance with the law following an investigation and assures full cooperation with the police in the case.